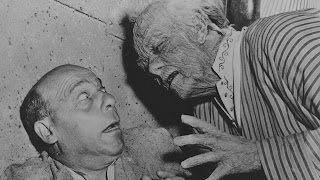 
The story and screenplay for PHARAOH'S CURSE are credited to Richard Landau, who had previously written VOODOO ISLAND. I wrote of his contribution:

....ISLAND is hugely handicapped by a vacillating script by Richard Landau. Landau's most stellar credit prior to this film is 1955's QUATERMASS XPERIMENT, though he was merely adapting Nigel Kneale's teleplay.


CURSE can't much help but provide a step up from the dismal ISLAND. One factor may be that for CURSE Landau could draw upon a history of Egyptian-curse tropes in earlier films. However, a bigger asset is that director Lee Sholem, nicknamed "Roll 'Em Sholem" for his reputed efficiency, provides much better directorial setups, even on the cheap, than does the dilatory Reginald LeBorg in VOODOO ISLAND.

Because CURSE is a cheap production, the script often depends on describing scenarios rather than showing them. The film begins in 1902 Egypt, where a British officer receives a report from two soldiers who have just escape a hellish battle against Arab insurgents. The brief dialogue establishes that the Arabs are savage opponents, though the rebellion is merely a backdrop that doesn't directly bear on the subject of the Egyptian curse-tale.

The commander has another problem, which he places squarely on the shoulders of his subordinate Captain Storm (Mark Dana). The captain is informed that an unsanctioned expedition has undertaken to break into an Egyptian tomb, and since this would upset the locals, the commander wants Storm to head them off. In addition, Storm and his two soldiers must take along a civilian, Sylvia Quentin, who is the wife of expedition-leader Robert Quentin. As one of the aforementioned cost-saving methods, the viewer doesn't even see the expedition for the first 20 minutes of the film.

CURSE's best scenes occur during its first half-hour. As Storm, Sylvia and two soldiers journey to the site of the expedition, they meet something stranger than rebel Arabs: an enigmatic Egyptian woman named Simira (Ziva Rhodan). Simira gives no explanation for her solitary sojourn in the Egyptian desert, but she claims that her brother, one Numar, is in danger at the tomb-site, She endeavors to convince Storm to take an alternate path to the tomb. Storm refuses to change his course, and soon various calamities assail the travelers (their water mysteriously disappears, a scorpion stings Sylvia). Finally Storm, despite fearing that Simira may be part of a rebel plot, agrees to follow her course.

The viewer finally gets to see the members of the expedition at the tomb-site. Their translator reads off a minatory cartouche, warning that the entombed king is guarded by the spirit of the pharaoh's sorcerer, who is capable of possessing a modern person to protect his lord's mummy. Further, the moment Robert Quentin cuts into the pharaoh's mummy to examine its face, the scene shifts to show Simira telling Storm that they have arrived at the site too late.

Storm descends upon the unsanctioned expedition, warning of the consequences of their actions, by which he means irate Egyptians. However, as Simira more or less predicts, her brother Numar is indeed possessed (off camera) and turned into a dessicated figure who can drain the bodily fluids out of his victims. I wasn't entirely clear as to why Storm can't manage to force the explorers to pack up and leave, but the extrinsic reason is obviously that both soldiers and explorers need to stick close to the tomb so that Numar, now the cursed minion of the dead pharaoh's sorcerer, can continue to attack them.

In the fulfillment of a minor subplot, Sylvia reveals that, despite her long history of following her husband into perilous situations, she's finally grown apart from him and plans to divorce him. Landau's script has some interesting psychological potential, in that Richard does regard Sylvia as a sort of "pet project" in which he shows off his ability to transform a "mousy librarian" into a woman of adventure, but Sylvia is too mediocre a character to play the role of the rebellious Galatea. She just prates some lines about wanting a home and a dependable husband, and that's all there is to that. There's also a weak attempt to suggest that she's fallen for Storm during her trek to reject her husband, but this too falls to sustain much interest.

Eventually, Numar is destroyed and Simira, who constantly clutches at an amulet of the cat-goddess Bast, simply disappears. The scenario loosely suggests that Simira may actually be a manifestation of the Egyptian goddess, but if this is so, why is she so concerned about a mortal man whom she calls her brother? Given how muddled VOODOO ISLAND was, I rather doubt that Landau had an answer to this plot-problem, though I suppose it's possible that Simira was once a living Egyptian woman whom Bast possessed, and that the afflicted Numar was the original woman's brother. Still, given that the dead sorcerer defends the tomb pretty well-- the explorers end up leaving the tomb's mysteries un-desecrated-- Bast's debatable presence seems irrelevant to the central narrative.

Posted by Gene Phillips at 2:24 PM
Email ThisBlogThis!Share to TwitterShare to FacebookShare to Pinterest
Labels: the marvelous