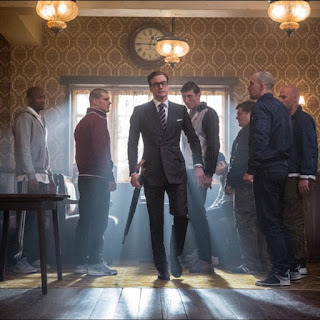 Though I expressed a low opinion of the Mark Millar source material, KINGSMAN THE SECRET SERVICE is certainly an improvement on the original in terms of pacing and eye-candy.

In the original graphic novel, young punk Eggsy is spirited out of his lower-class environs by his uncle Jack, who gives Eggsy a chance to train with the made-up British superspy agency, Kingsman. In a chance that's neither good nor bad, this time it's Eggsy's father, name of Lee, who's a member of Kingsman, and when Lee meets his death fighting the minions of a supervillain, his friend Harry Hart (Colin Firth) steps in to succor Eggsy (Taron Egerton). Once Eggsy receives all the proper training in using all the requisite super-spy weapons-- which are meant to be even more over-the-top than the most fabulous Bond accoutrements-- Eggsy and Harry join forces to destroy the schemes of Richmond Valentine (Samuel L. Jackson), who is kidnapping the movie-celebrities he loves to protect them from the world-destroying weapon he plans to unleash, all to the end of reducing Earth's rampant population.

SECRET SERVICE is just as silly and witless as the graphic novel, and the overacting of Jackson does nothing to improve things, though Firth's ability to channel Michael Caine's "Harry Palmer" character is diverting. I enjoyed seeing Sofia Boutella take on the formerly male role of the villain's bionic henchman Gazelle, and that's about it. Both the real Michael Caine and Mark Hamill have supporting roles.

Despite the fact that Harry Hart appears to die very bloodily in SERVICE, Colin Firth plays him again in GOLDEN CIRCLE, and most of the other principals return, as does the writer-director Matthew Vaughan. However, this film is an original script not tied to any graphic novel, and though it's almost as violent as a Millar work, it's not nearly as sloppy and witless.

Though there are also just as many vacuous pop-culture references here, the Vaughan-Jane Goldman script doesn't seem to be about NOTHING BUT pop culture. To make Eggsy's job all the harder, the villain-- drug-dealer Poppy Adams (Julianne Moore)-- assassinates most of the Kingsman organization, leaving Eggsy only with a few minor allies-- one of whom, as I noted above, is the recrudescent Harry Hart. However, the remnants of Kingsman get some help from an American superspy-agencny, "Statesman," whose operatives are given to using lots of cowboy motifs.

The action is better staged this time, and the villain's scheme-- to force the world powers to legalize drugs, so she doesn't have to be a criminal any more-- allows for some witty satire about modern America's ambivalence toward illegal substances. However, just so the script doesn't stray too far from the original template, Poppy does keep her own pet celebrity, Elton John (playing himself), who's good for a few laughs until he improbably starts hurling kung-fu kicks.
Posted by Gene Phillips at 2:34 PM
Email ThisBlogThis!Share to TwitterShare to FacebookShare to Pinterest
Labels: combative adventures, the marvelous