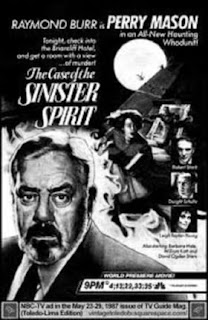 
Since I've never been a Perry Mason fan, I've no idea how often the famed defense attorney tilted his legal lance against the supernatural, but I would assume that whenever he did so, he just papered the spirits out of existence.. SINISTER SPIRIT, one of many Hallmark TV-films featuring a much grayer version of Raymond Burr reprising his 1950s teleseries role, follows this pattern, but it does start off with Perry having a really bad nightmare, which is certainly one of the few times the indefatigable lawyer shows a more human side.

Along with his legal team-- Barbara Hale reprising her role as Della, and William Katt playing the son of the first character who provided Mason's "legwork"-- Perry defends a publisher (Robert Stack), who's been accused of killing a prickly horror-author. Prior to his death, the author invites a group of his enemies to a soiree and then terrifies them with fake supernatural tricks. After his death, one of the witnesses apparently beholds the ghost of the author's ancestor, but given the earlier display of chicanery, I don't know why anyone would buy into such ghost-sightings.

In fact, the ghost-business has very little to do with Perry Mason managing to solve the case so as to exonerate his client. The denouement was fairly clever, though for the most part the flick as a whole is a forgettable time-killer. And in contrast to the TV-show's district attorney, who usually seemed rather torqued about losing to Perry, the replacement character, played by David Ogden Stiers, seems overly almost cheerful at Perry's big win. 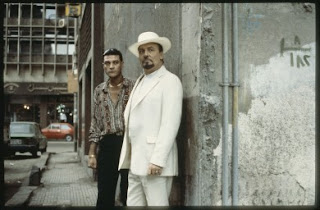 Ten years later, Hallmark brought to TV a shot-in-Egypt trifle known as LEGEND OF THE LOST TOMB, which might be called "Indiana Jones for the pre-teen set." Two American teens, John and Karen, visit Egypt and get involved in seeking out a fabulous treasure in an undiscovered tomb, while being chased by the rather low-rent menace of a schemer named Doctor Bent (Stacy Keach) and his single piddling henchman, who likes to torment victims with scorpions.

Though a lot of the lower-level actors are Egyptians, none of them distinguish themselves all that well, and the colorful locations don't do much to dispel the tedium. Only two elements prove slightly memorable:

(2) The odd way the characters under-react to the presence of genuinely supernatural phenomena. For most of the film, no one displays the slightest fear of Egyptian curses. Then, in the last forty minutes, tomb-statues start shooting mystic rays from their eyes, not once but twice. And the only reason no one reacts must be that they've come to expect such things after many viewings of RAIDERS OF THE LOST ARK.

Posted by Gene Phillips at 1:35 PM
Email ThisBlogThis!Share to TwitterShare to FacebookShare to Pinterest
Labels: phantasmal figurations (u), the marvelous, the uncanny