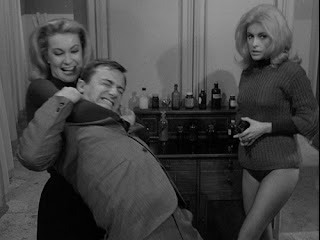 Whereas I often expect to find strong symbolic discourse in fantasy TV-shows like XENA and BUFFY, NBC's colorful but light-hearted spy-fy series THE MAN FROM UNCLE would seem to be less promising territory. True, since the show is about a predominantly American agency, UNCLE, that constantly thwarts the schemes of the often-European minions of THRUSH, MAN FROM UNCLE is a fantastic transformation of mundane spy-tropes, often made even more distanced from the real world by the frequent use of science-fiction conceits. But by the time "Girls of Nazarone" appeared, late in the program's first (and only black-and-white) season, the generally simple content of the episodes had largely been established. Thus "Girls" is an unusual entry in providing a more sustained exploration of male and female roles in the world of spy-fi. It's all the more unusual in that Peter Barry, the writer credited with the original story for "Girls," had only a smattering of TV credits, none very outstanding. It's possible that producer Sam Rolfe and credited teleplay-author Peter Allan Fields may've taken a piece of coal and polished it into a mythic diamond, but their careers aren't all that strong in the mythicity department either.

The episode's title is one of its cleverest concepts: spoofing the title GUNS OF NAVARONE (1957 novel and 1961 movie) so that dangerous, possibly phallic "superguns" become transformed into "perilous Pussy Galores." all of whom are blonde like the Honor Blackman character from GOLDFINGER. The episode's chapter-titles keep reminding the viewer that all of the heroes' enemies are these perniciously seductive blonde ladies, and there may even be a slight sapphic flavor to the narrative, given that neither of the male heroes ever manages to have his way with the lissome ladies.

As in many episodes, American agent Solo and his Russian ally Kuryakin descend upon a European city, looking to claim or protect some secret vital to the defense of the Western World. This time the locale is Cannes on the French Riviera, where supposedly the famed Grand Prix race is scheduled to be held. The agents seek out the hotel room of one Doctor Kelwyn, who has apparently approached UNCLE to obtain protection for his invention: a serum that accelerates bodily healing in humans. On their way the agents brush by a blonde woman of mature years (Marian Moses), later identified as Madame Streigau (from the Italian word "strega," meaning "witch.") Streigau is accompanied by a small coterie of younger blonde women, one of whom will later be identified as Lucia Nazarone (Danica D'Hondt), a female race-car driver who has participated in several tourneys and is presumably in Cannes for the Grand Prix.

Once the agents get to the room, they find that Doctor Kelwyn is inexplicably missing, and that the room is now occupied by a tourist, an American schoolteacher named Lavinia Brown (Kipp Hamilton). Naturally, the agents' insensitive intrusion as they comb the room for clues gets on Miss Brown's nerves, with the usual comic results. Solo and Kuryakin learn enough to indicate that Kelwyn has been kidnapped, and when a street vendor is slain, the agents determine that he was probably trying to blackmail Kelwyn's kidnappers.

Certain clues lead the spies to a garage, where they once more encounter Lucia Nazarone. The young woman stonewalls the agents and makes them leave, but they hang around long enough to see Lucia apparently shot down, St. Valentine's Day-style, by a chatter-gun wielded by Madame Stregau. Streigau escapes with Lucia's body. and the agents are nonplussed as to what they've witnessed.

Their puzzlement increases the next day, when a newspaper announces that Lucia Nazarone, despite her apparent death, has been seen entering a Cannes health clinic run by one Doctor Baurel. Solo decides to bull his way into the clinic and corners Lucia, who clobbers him with a very unfeminine display of strength. Baurel shows up and has the clinic's workers-- all of whom are hot young blondes-- eject Solo./

Stymied, the agents decide to provoke their enigmatic enemy into coming to them. They plant the idea that Lavinia has somehow located a copy of Kelwyn's formula and sold it to UNCLE. Though this is meant only to smoke out Streigau, inevitably the innocent civilian is captured and placed in danger. Streigau's blonde amazons easily trounce Kuryakin-- though they rather generously leave him alive-- while Solo, invading the clinic again, is soundly beaten down by Lucia. It's soon revealed that Lucia was a test subject for the healing serum, though it's never clear as to why she consented to be THRUSH's guinea pig. Because of the serum, Lucia has become a veritable dynamo, though one who's become so aggressive that she sounds like a Dionysian Maenad. (After she conquers Solo, she fantasizes about being allowed to tear the agent apart "with my bare hands.")

Inevitably, Kuryakin comes to the rescue of both Solo and Lavinia. Kuryakin and Lavinia witness Lucia burn herself out from the fatal serum, while Solo fails to capture Streigau-- who is actually a previously-seen THRUSH villain, one Doctor Egret-- because he's thwarted by two athletic but hardly super-powered young women. The episode ends on one more cutesy reference to blondes-- said blonde being Illya Kuryakin.

Barry's story seems to be dimly aware that blondes have acquired, in Western culture, a certain unique glamor, and he merges this conceit with the idea of the modern Amazon, which becomes a major trope in superspy-fiction with the elaboration of Ian Fleming's Bond series into the celebrated film-franchise. I could go into greater detail as to how the film-franchise emphasizes Amazonian females far more than Fleming's prose series, but it's intriguing to see how Barry identified this burgeoning trope at a time when there had only been four films in the series. The sapphic element melds with that of the Amazon trope, though like the film GOLDFINGER, this element is kept on the down-low.


Posted by Gene Phillips at 3:49 PM
Email ThisBlogThis!Share to TwitterShare to FacebookShare to Pinterest
Labels: combative adventures, the marvelous