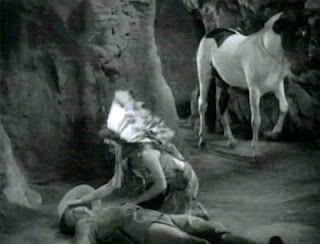 
On the face of things, THE PAINTED STALLION looks like dozens of other oater-serials. The main conflict takes place in the year 1820. Mexico had just won its independence from Spain, which meant that the Spanish-held territory of California fell under Mexican control. Despite Spain's disavowal of control, local (fictional) dictator Dupray decides that he wants to keep control of the state, with the help of his henchmen (one of whom is played by future "Cisco Kid" Duncan Renaldo). Dupray's main opponents, though, are not agents of the Mexican government, but Caucasian cowboys looking for new enterprise. The main hero is Clark Stuart (Ray Corrigan), a two-fisted treaty negotiator representing U.S. interests, but others include a clever old wagonmaster (played by silent-film cowboy Hoot Gibson) and three famed frontier-figures: Jim Bowie, Davy Crockett, and "Kid Carson"-- by which I mean "Kit Carson as a boy."

To say the least, nothing in PAINTED STALLION is remotely rooted in real-world history. Still, even though STALLION is not historical, it does thump its tub pretty well for the "Manifest Destiny" of Caucasian Americans, who, of course, will eventually absorb most of Mexican California into its authority. It's this sense of an overriding historical destiny that causes me to rate its mythicity as highly as I do. It helps, too, that the cinematography and location work are a cut above the usual western serial, so the visual grandeur enhances the simple theme. That said, I must admit that most of the conflicts are just standard back-and-forth gun-battles between the good guys and the bad guys.

Only one element of STALLION qualifies it as a metaphenomenal film, and that's the fact that Stuart and his friends frequently receive aid from a mysterious character known only as "the Rider of the Painted Stallion." Frankly, I don't know exactly why the film's title focuses on the Rider's horse: it has no special appearance or talents. The Rider is one of the few female heroes in serials, although she's usually on the periphery of the action, not unlike "Lothel" in the much later JUNGLE QUEEN. Her attire is that of a male war-chief, with a big feathered bonnet and a feathered breastplate, which makes it hard to see whether or not she even has breasts. This would be odd attire for an Indian maiden, but the Rider is later be revealed to be a white woman raised by Comanches. The oddness of her garments doesn't quality the Rider for metaphenomenal status. However, she has one unexplained gimmick: she can shoot arrows that make bizarre whistling sounds as they travel to their targets (usually striking to wound, until the ultimate chapter). Stuart is told that the Indians believe she's a spirit who promotes peace, so a possible influence from the 1936 comic-strip THE PHANTOM is possible here, though the timing is rather close. The 1933 LONE RANGER serial may be a more likely influence, given that the Rider's whistling arrows are a memorable schtick like the Ranger's silver bullets-- and it's the arrows that make the Rider uncanny, even if it's through an auditory rather than a visual trope.

The 1931 film version of the novel TRADER HORN is also a possible influence, since, as that film posits that its savage people regard a white woman as a a goddess because of her blonde hair. I'm tempted to see the Rider as a sort of feminine spirit blessing the eventual destiny of the United States, but I must admit that this is never stated outright.

Posted by Gene Phillips at 3:21 PM
Email ThisBlogThis!Share to TwitterShare to FacebookShare to Pinterest
Labels: combative adventures, diabolical devices (u), outre outfits (u), the uncanny