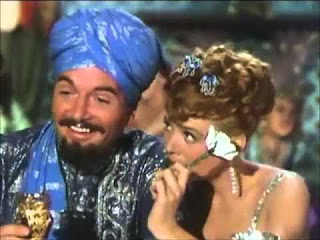 
Most of the "Arabian Knockwursts" that came out of post-war Hollywood are pretty forgettable, and THIEF OF DAMASCUS, one of many cheapies knocked out by producer Sam Katzman, has no better a script than any of the others. However, Katzman must've lavished a comparative fortune on the art direction, since THIEF is noteworthy for a vivid use of contrasting colors, without nearly as much mix-and-matching of costumes from different historical periods.

The 1944 ALI BABA AND THE FORTY THIEVES is probably a loose influence here, in that again the heroes use the magical "open sesame" cave as a refuge where they can escape the forces of the evildoer. However, the gimmick for which THIEF is best remembered is that forgettable soldier-hero Abu Amdar (Paul Henreid) receives aid from four figures out of the genuine Thousand and One Nights: Scheherezade (Jeff Donnell), Sinbad (Lon Chaney Jr.), a lamp-less Aladdin (Robert Clary), and Ali Baba (Philip Van Zandt), Following the example of the 1944 flick, Ali Baba is the leader of the Forty Thieves, not their enemy, as he is in the original story.

Even for this sort of trivia, it's surprising that someone felt the film also needed to conjure with the immortal THIEF OF BAGDAD, since there's no "thief" as such in the story, even if the hero shares the first name of the thief in the 1940 remake. Abu is a general who somehow rises to a command position in the armies of the rapacious Khalid (John Sutton), and suddenly decides that Khalid is a really bad guy because he won't spare the city of Damascus. To his credit, Abu expresses this opinion even before he talks treaty-terms with Damascene princess Zafira, with whom he immediately swaps lusty glances. Khalid doesn't like his second-in-command challenging them, and tries to have Abu arrested. Abu goes on the run, and in seeking to defend himself from pursuing soldiers, he does steal a sword from a smithy (though this doesn't really serve to justify the "thief" title).

The sword, though not magical, is made of the newly-created "Damascus steel," and so shatters any ordinary blade turned against it. This really doesn't play a big role in the story, however, which is much more concerned with (a) Khalid trying to marry Zafira, only to be comically blocked by the wiles of Scheherezade, (b) Abu getting help from the other three Arabian Nights luminaries, although only Ali Baba and his thieves are much help, while Sinbad and Aladdin just supply comedy relief. Eventually Abu does use both the special Damascus swords and the "open sesame" cave to undermine Khalid's forces, to defeat Khalid and to marry the princess.

There's one side-plot atypical for the subgenre. Some time after Abu has met Zafir, his true love, he enjoys a little canoodling with an old girlfriend, Neela (Elena Verdugo). Usually the main hero is so lovelorn for his new paramour that he doesn't even look twice at former lovers. Of course, Abu's canoodling takes place so that Neela has a motivation to almost betray the hero's forces. In order to make up for her almost-betrayal, Neela sword-fights some bad soldiers and acquits herself by dying heroically.

Posted by Gene Phillips at 3:09 PM
Email ThisBlogThis!Share to TwitterShare to FacebookShare to Pinterest
Labels: combative adventures, the marvelous