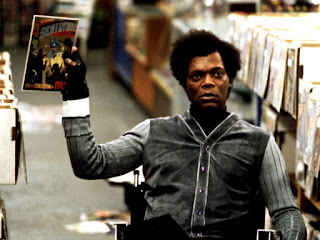 In re-watching UNBREAKABLE, the first thing that I, as a sometime comics-critic, had to put to one side was that writer-director M. Night Shyamalan really has no interest in the medium of comic books. He’s manifestly not interested in the medium as a whole, or any of its storytelling dynamics.  His only interest is the dialectic of the medium’s most famous creation, the superhero.

That said, the next question that arises is: what does Shyamalan have to say about the superhero? Traditionally, movies have either sought to reproduce the superhero genre faithfully or to undermine it in some way, either drawing attention to its risible elements (the BATMAN teleseries) or producing an outright satire of the form (FEARLESS FRANK).

UNBREAKABLE, like Shyamalan’s previous box-office success THE SIXTH SENSE, does not approach its metaphenomenal subject matter in a straightforward manner. But cinema had a long history of ordinary-looking psychics who could see all sorts of weird phenomena—dead people included. Superheroes were designed to stand out from the quotidian milieus that gave them birth, to dress as no people in the history of Earth ever dressed in regular life, be it in bat-costumes, suits of armor or even just a demure domino-mask.

Thus, even though UNBREAKABLE features a fair quantity of jury-rigged comic books in which superheroes wear bizarre outfits, Shyamalan can only depict a real-life superhero as being an ordinary looking man who’s unaware of his special talents.

Following a prelude that introduces the character of Elijah Price as a newborn infant, the viewer meets the mundanely named David Dunn (Bruce Willis), a security guard seen returning to Philadelphia by train. The train derails, killing everyone aboard except Dunn. Nonplussed by his amazing survival, Dunn has no option but to return to his normal life—including marital troubles with his wife Audrey (Robin Wright). His young son Joseph (Spencer Treat Clark) is caught in the middle, and the three of them seem to be trapped in an Ibsen play, with no way out of their trammeled lives.

Enter Elijah (Samuel L. Jackson), a curator at an art gallery with a number of comic-book exhibits. Elijah suffers from a weakness in his bones that makes him severely at risk from even minor accidents, and as another flashback scene shows us, his discontent with his constitutive weakness has led him to idolize superheroes. So far, Elijah represents the general opinion that mainstream culture has usually expressed regarding the superhero genre: that its main purpose is to provide power-fantasies for those who have no power. Further, Elijah goes a step farther, telling both Dunn and Joseph that Dunn possesses powers that Dunn himself has never imagined.

Obviously, even when the story validates Elijah’s theory—even to the extent of giving Dunn a kryptonite-like weakness— some tropes of the superhero genre are still not credible in Shyamalan’s largely mundane world.  No one in Shyamalan’s can manifest X-Men-like abilities; no one shoots lethal beams from his eyes or conjures ice from his fingers. Shyamalan’s superhero is limited to actions that are improbable extensions of normal human abilities, and even the movie’s one climactic fight takes advantage of Dunn’s weakness in order to scale down the powers involved,  so that Dunn and his merely human opponent are on the same footing.

Though anyone interested in UNBREAKABLE probably knows the film’s “big twist ending,” I don't need to discuss it, since the twist does nothing to alter the director’s implicit theme. That theme might best be expressed by a new take on an old Zen koan:

I’ve seen Shyamalan not infrequently compared to Alfred Hitchcock. Yet Hitchcock, despite his induction into the ranks of Serious Directors, was not an “artsy” director. The world of ordinary life is something that Hitchcock’s characters glide through as fate guides them into extraordinary adventures, whether those adventures involve courting beautiful lady spies or contending with serial killers.

Nobody glides in UNBREAKABLE. Shyamalan’s characters plod from one encounter to another, and though the script leaves no doubt that Dunn shares the heroic character of comic-book protagonists, he’s still a Prometheus bound by the chains of reality. Elijah argues that Dunn damped down his superhuman potential because it would have interfered with his marriage to Audrey. This self-sacrifice, however, appears to be at the root of his unhappy marriage. Joseph is intrigued by the idea that his father may have super-powers—what kid would not be intrigued by the possibility? But he wants his father to have super-powers because on some level Joseph intuits that this has led to marital discontent. Thus what Joseph really wants is normality in his parents’ relationship, and his father’s superhuman status is a means to that end. This is demonstrated by the memorable scene when he attempts to test his father’s invulnerability with a bullet.

UNBREAKABLE’s dialectic of heroism and villainy is less impressive than Shyamalan’s signal ability to provide narrative momentum not through melodramatic events, as Hitchcock usually did, but with scenes of utter mundanity, scenes that make the viewer yearn for the pleasures of melodrama. For me he resembles Neo-Realists like Rosselini more than Hitchcock, and if I judged a film’s mythicity on style rather than content, UNBREAKABLE’s rating there would be higher. 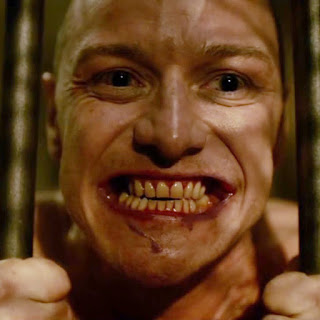 In SPLIT, Shyamalan attempts to codify his dialectic somewhat. Though some of Elijah’s remarks suggest that super-abilities arise from stressful circumstances, only in SPLIT does a scientist make this an explicit requirement for empowerment. SPLIT is not nearly as stylistically adventurous as UNBREAKABLE, for its basic template—crazy man holds one or more people prisoners and they try to escape—is more overtly melodramatic.

This time, rather than a hero or a villain, we have a monster in the character of Kevin (James MacAvoy). After Kevin captures three teenage girls and imprisons them in a tunnel-system beneath the zoo where he works, the girls learn that he’s a multiple personality case, one who doesn’t always seem cognizant that all the personas share the same body. Two of the girls die, leaving “Final Girl” Casey as the last survivor seeking to escape Kevin before he turns into his most brutal persona, “The Beast.”

Apart from MacAvoy’s stunning performance, SPLIT is merely a decent thriller, notable for being a companion piece to the currently-airing GLASS, which brings together all the parts of Shyamalan’s “ordinary superhero” universe.

NOTE: UNBREAKABLE is a combative drama; SPLIT is not.
Posted by Gene Phillips at 2:20 PM
Email ThisBlogThis!Share to TwitterShare to FacebookShare to Pinterest
Labels: combative dramas, the marvelous