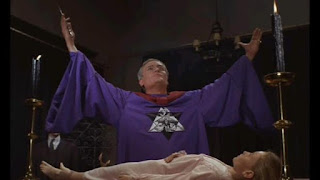 I've recently finished and reviewed the 1934 Dennis Wheatley occult thriller THE DEVIL RIDES OUT,  and, having done so, I gave another look at the British film adaptation, given the same title in Great Britain but renamed THE DEVIL'S BRIDE for American audiences.

I remembered liking BRIDE quite a bit, and so, once I'd read the book, I was cautious not to fault the movie simply because it didn't follow the book in some particulars. As it happens, BRIDE does follow the Wheatley novel pretty closely, thanks to a strong script from Richard Matheson. Most of what Matheson leaves out is the B-story in which the American Rex Van Rijn romances the neophyte Satanist Tanith and persuades her to join the forces of good.

And yet, even though Matheson and director Terence Fisher follow the same basic patterns of the novel-- reproducing most of the book's studious reproduction of occult lore-- I don't rate BRIDE as highly as DEVIL RIDES OUT.

I certainly can't fault Christopher Lee. He channels the stern but humane character of the occult expert Duc de Richleau perfectly. In the novel the Rex character serves as the Duc's strong right arm, and it's certainly not actor Leon Greene's fault that a lot of the material that firmed up Rex's character is omitted from the screenplay-- but those cuts still have the effect of making Rex a fairly inconsequential figure. The other "two musketeers" of the book, Simon and Richard, don't exactly glow with charisma in the book, and so their characters in the movie are no better than they have to be. Charles Gray plays the main villain Mocata with oily grace, and contributes the second best performance, and even Richard's wife Marie, though not a major character, gets a strong scene in which she has to fend off Mocata's insidious mind-control. The only actor who proves an actively bad choice is young Niki Arrighi, whose high-pitched voice makes her Tanith entirely insufferable.

I tend to think that Fisher's direction, coupled with Arthur Grant's cinematography, is more at fault, for BRIDE doesn't visually sustain the pulpy thrills of Wheatley's novel. Admittedly, even had Fisher had all the money in the world, I'm not sure how a film in 1968 could have rendered an apparition like the Goat of Mendes so that it seemed like more than a man in a costume. But even some of the scenes that could've popped-- like one in which Rex and the Duc storm a Satanic ritual ground in one of their 1929 automobiles-- are handled in routine fashion. Fisher only seems on solid ground when he's having Chris Lee dominate a scene with no more than his sonorous voice-- possibly because he'd worked with Lee so often prior to BRIDE. Without the needed visual emphasis-- something that does come across in Wheatley's prose-- Lee's voice isn't enough to translate the occult lore into a thing of mythic wonder.

Though in the novel-series the Duc's fellow musketeers may be as important as he is, in BRIDE "the Duc stands alone," being the primary hero of the story. BRIDE takes its place among many other adaptations-- the 1939 HOUND OF THE BASKERVILLES film, for one-- that, despite being faithful to stories with deep mythic resonance, gets all the partss right but somehow miss out on bringing them into a whole greater than the sum of the parts.
Posted by Gene Phillips at 2:58 PM
Email ThisBlogThis!Share to TwitterShare to FacebookShare to Pinterest
Labels: combative adventures, the marvelous