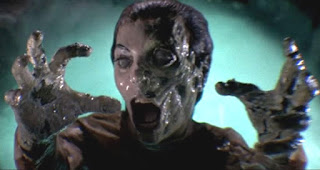 
It's a real contest for me to decide whether or not the second sequel to THE AMITYVILLE HORROR is duller than the original flick. Though there's a passing reference to the Oedipal murders from the second film, David Ambrose's script largely follows the first film's pattern of subjecting the new occupants of the haunted house to a series of varied spook-scares.

The most interesting thing about the script is that it starts out with a "ghost-busting" expose by two journalists, John (Tony Roberts) and Melanie (Candy Clark), as they get the goods on a phony spiritualist renting the house. Ironically, though the Amityville ghosts (still apparently coming both from an Indian burial ground AND from a gateway to Hell) leave the phony ghost-summoner alone, the interference of the journalists inspires the spooks to start their killing spree, initially targeting the realtor in charge of the property. The ghosts sometimes manifest, as in the first film, in the form of buzzing flies, and again they can strike at targets even though they're far removed from the house (Melanie suffers a car accident not unlike the one that afflicts the Catholic priest in the original flick).

Despite the death of the realtor, John moves his family into the cheap-as-dirt house, and they all suffers assorted hauntings. The most impressive sequence involves the death of the family's teenage daughter, giving Tess Harper (John's wife) the chance for major grief. But none of the hauntings are anything special, though I rather liked the makeup job on the ghost-or-demon that pops out of the hellgate at the conclusion.

I never saw the third flick in 3-D, and probably never will. I don't think I missed anything.


Posted by Gene Phillips at 2:18 PM
Email ThisBlogThis!Share to TwitterShare to FacebookShare to Pinterest
Labels: the marvelous