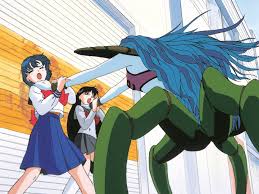 
SAILOR MOON S was the first movie-length story in the franchise, but unlike some anime movies based on concurrently running serials,"R" makes no attempt to initiate viewers unfamiliar with the characters and plotlines. The story loosely takes place in the series' second long arc, which also garnered the title "SAILOR MOON R," though the movie's not strictly in-continuity with the series.


For the most part, it wouldn't be hard for a newbie to follow the main premise: that middle-schooler Usagi and her five same-age friends occasionally cast aside their normal lives in order to don the outfits of superheroic "Sailor Scouts," the better to repel invasions of aliens and demons from planet Earth. The average viewer would probably also follow well enough that the Scouts have a couple of talking cats who render them aid, and that Usagi-- who is the unofficial leader, Sailor Moon-- has a boyfriend, Mamoru, who also maintains a costumed identity, that of "Tuxedo Mask." But if one has never seen the series before, I rather wonder what the casual viewer would make of Chibiusa, a grade-school kid who hangs out with the older ladies-- much less the fact that Chibiusa apparently has a major crush on Mamoru and is jealous of his attentions to Usagi. (Usagi, not much more mature than Chibiusa, usually returns the hostility, though it's revealed elsewhere that Usagi and Mamoru are Chibiusa's parents, though neither of them has any memory of this facet of their past lives.)

The only past life with which "R" concerns itself is Mamoru's upbringing on Earth, where he, like Usagi and the other Scouts, was raised as an ordinary human being. His adoptive parents perished in a car crash, but grade-school Mamoru found some solace with a strange young boy, Fiore. Mamoru, not knowing that Fiore is an alien, gives his young friend the gift of a pretty flower (an odd gift between boys, but maybe that's OK with the serial's primary audience of teen girls). Fiore departs to find a corresponding gift for Mamoru, but he's gone so long that Mamoru grows to young manhood and comes to believe that Fiore was some imaginary playmate. Fiore, also grown to teen-hood, then comes back to Earth with his gift, which causes some amusing speculations among the Scouts as to whether Mamoru may have done some "experimentation." However, the Scouts soon learn that Fiore's brought an alien bloom, "the Xenian Flower," to their planet, and they must use their powers to defeat the flower's designs to drain Earth of its life-force.

The highlight of the film is the creative design of the Xenian Flower, which can both scuttle around on its roots and manifest as a half-woman, half-planet hybrid with assorted weird abilities. Psychologically, the narrative focuses on cementing the relationship of Usagi and Mamoru, but their romance as seen here doesn't seem one of the stronger melodramatic developments in the ongoing show.

Posted by Gene Phillips at 2:57 PM
Email ThisBlogThis!Share to TwitterShare to FacebookShare to Pinterest
Labels: combative adventures, the marvelous