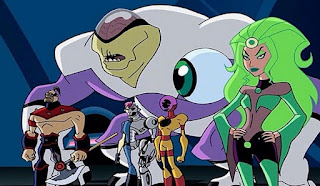 
For Silver Age kids, the quintet of villains known as the Fatal Five were among the best villains introduced during that era. All five-- the half-human Tharok, the Emerald Empress, Mano of the disintegrating palm, the axe-wielding Persuader and the ultra-powerful Validus-- were badasses as few DC villains were. However, in addition to being badass, all five also had certain limited but evocative characterizations, and that's what is missing from this tedious new Justice League original video. Under the direction of Sam Liu, the five villains are badasses with no depth, existing just to be the story's villains-- and three of them are given very bad visual re-designs, on top of it.

The story begins in media res, with three of the Fatal Five using a time-travel device to leave the 30th century-- the era of their foes, the Legion of Super-Heroes-- and seek out the 21st century, in search of their two missing comrades. One Legionnaire, Star Boy, also travels in time to stop them. (It wasn't clear why he was the only one of the two dozen Legionnaires able to do so.) However, this version of Star Boy needs some 30th-century medications to stay sane, and he forgets to take them along with him. He goes a little nuts, gets captured by Batman, and spends a month or two in an asylum until he finally remembers who he is and why he's looking for the villains. When Batman finds out Star Boy's true nature, he brings the League into the matter, but by that time the three members of the Five have set in motion their plot to liberate their partners from the custody of the Green Lantern Corps, with the unwitting help of Earth's current Green Lantern, Jessica Cruz. (Some scripter thought it would be a brilliant touch to give Jessica the risible name of "Limelight," which does not appear to be a thing in the comic-book original.)

The plot collapses like a deck of cards when one looks at the paltry excuse given for the Legion to send the two villains back in time-- namely, that in all the myriad worlds of the 30th century, no one has the power to contain Validus and the Empress, so they must be imprisoned by the Green Lanterns, who no longer exist in the future era. This is a lame excuse to set up the many physical battles between the League and the Five, most of which are forgettable, except for a half-decent contest between Wonder Woman and the Persuader. There are two "B-stories:" teenaged superheroine Miss Martian trying to earn the respect of the older Leaguers, and "Limelight" suffering from a crippling anxiety that she only manages to overcome at the climax. Indeed, that climax is so focused upon letting the young female Lantern beat up the whole Fatal Five that the character is very nearly a "Mary Sue."

Star Boy, like various other Legion characters, functions as a guest-star in the story, despite getting more screen-time than the rest. 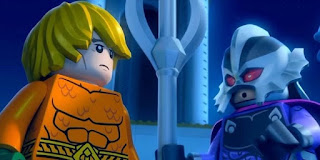 I have no great love for Lego versions of superheroes or anything else, and the spectacle of watching such characters devolve into broken-up bricks leaves me cold. Still, even though AQUAMAN: RAGE OF ATLANTIS also focuses upon a hero with a psychological crisis, the script handles the story with comic aplomb. (I pretty much have to designate RAGE a comedy, given that the end-threat is a gigantic device with the acronym SLURP.)

Despite the title, this is a Justice League adventure that just happens to place its emphasis on the importance of being Aquaman. The King of the Seven Seas gets humiliated in an encounter with Lobo, who's then driven away by the rest of the League.

Aquaman remains fairly chipper despite this setback, and invites his crimefighting buddies to join him for a visit to Atlantis, where the heroes meet Aquaman's wife Mera for the first time. However, Aquaman's half-brother Ocean Master has conspired with the evil Red Lantern Atrocitus to brainwash the citizens of Atlantis, so that they (including Mera) turn on their former king.

The heroes escape via dimension transporter, accidentally ending up on a near-waterless world. This happens to be one of the worlds victimized by Atrocitus, thus illustrating his plans for Earth. The script's means of giving Aquaman the chance to prove himself on a desert-world is pretty clever, but a lot of the Aqua-morale boosting gets tedious. The heroes return to Atlantis and have it out with the many pawns of Atrocitus. There's also a B-story showing a couple of Batman's aides, the "Barbara Gordon" Batgirl and the "Damian Wayne" Robin, fighting off invading Atlanteans, and Lobo not only comes back but is given a credible reason to lend aid to the heroes. Despite their participation in the overall battle, Lobo, Mera, and the two Bat-spawn all rate as "guest stars" within this light-hearted outing for the JLL (Justice League of Legos).

Posted by Gene Phillips at 8:58 AM
Email ThisBlogThis!Share to TwitterShare to FacebookShare to Pinterest
Labels: combative adventures, combative comedies, the marvelous