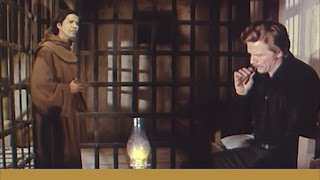 
Here's a "weird western" that bears a nodding resemblance to 1999's PURGATORY, in that both concern western protagonists with an ambivalent relationship to death.

Seasoned gunfighter James Devlin (Steve Forrest) has been sentenced to hang for vague reasons in a small western town (is there any other kind, in westerns?) Though the gunfighter has a cute young senorita (Barbara Luna) who wants him to live for her, Devlin seems philosophical about his impending doom. During a pre-execution conversation with a friar, Devlin makes three "lucky guesses" about the friar's state of mind, and then shows off his set of Tarot cards, a gift from a gypsy woman he once helped. Naturally, the card that interests the outlaw most is the Hanged Man, though Devlin mentions that the card doesn't signify death, but a major change in one's life.

The execution goes through as planned. Later, Devlin lies in state, with the friar and the senorita talking nearby-- and then he simply gets up. He can't immediately speak-- though that changes later-- and his first communication is a note to the friar, reading, "What did Lazarus do with the rest of his life?"

The local lawmen don't know what to do: since Devlin's been executed, technically he's outside the boundaries of the law. Once the gunfighter can speak again, he reflects on the need to make a change in his old, sinful life. Conveniently, two innocents--a young widow-woman and her cute son-- need help against a land baron/mine owner named Halleck (Cameron Mitchell). In addition, the young woman was specifically widowed because Devlin killed her husband, though this dramatic point is understated to the point that some may miss it entirely.

Some online reviews asserted that Devlin received mind-reading powers after his "resurrection," but I saw no indication of his possessing any special potency, except for his having unaccountably survived hanging. Still, at least one of Halleck's henchmen considers Devlin a supernatural being, and the hero' climactic battle with Halleck's forces takes place in a dingy mine where a smelting-furnace makes everything look the fiery hell to which the villains will eventually descend.

Since this was a pilot for a TV series, the film is quick to send Devlin off on a quest to save other people in a "Fugitive"-like pattern. Luna's character is pretty much forgotten, and the script promotes a cranky old man for comedy relief who adds nothing to the mix.  The story's main trope is closest to that of the phantasmal figuration, since one never knows whether or not Devlin's come back to life for purely natural reasons-- though the fact that he did so gives him an aura of special *potency* like those of the PURGATORY outlaws-- even though their resurrection is literal and thus marvelous in nature.

Posted by Gene Phillips at 2:30 PM
Email ThisBlogThis!Share to TwitterShare to FacebookShare to Pinterest
Labels: combative adventures, superlative skills (u), the uncanny