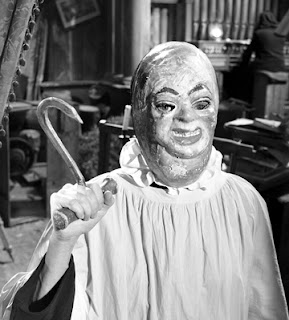 
This film's title is undoubtedly beholden to the success of 1960's PSYCHO. However, Jimmy Sangster's script, said to have been loosely based on a Josephine Tey novel, bears less in common with Hitchcock than various "old dark house" thrillers.

Once again, rich English people got troubles. The progenitors of the Ashby clan both died years ago, so that now the Ashby mansion is inhabited only by two grown children, Simon (Oliver Reed) and Eleanor (Janette Scott), and by their aunt Harriet. But no one says much about the dead parents. Eleanor cares only about mourning her lost (and favorite) brother Tony, who apparently committed suicide in the ocean when he was fifteen, though the body was never recovered. For his part Simon shows every sign of becoming a hard-drinking wastrel, who continuously duns the family lawyer for extra money. However, only on a specified date will both Eleanor and Simon divide the wealth left to them by their parents. Eleanor's behavior suggests that she may commit suicide to be with her beloved brother, and Simon intimates that she'd be better off in an asylum-- which would make it possible for Simon to enjoy the entire bequest.

With only weeks to go before the inheritance date, a stranger saves Eleanor from drowning herself. Eleanor sees in him a resemblance to the dead Tony, and indeed he claims that he is Tony. He survived his suicide attempt and went wandering for several years, until he finally chose to return to claim his part of the inheritance. Eleanor is thrilled to have him back, while Simon and Harriet are more ambivalent-- and with good reason. Sangster quickly reveals that Tony is an impostor with only a nodding resemblance to the deceased brother, and that he's been coached in the family's history by his co-conspirator, the son of the family lawyer. However, "false Tony" is at heart a decent fellow, and he dislikes deceiving the vulnerable Eleanor.

Then Tony gets a taste of some night-time weirdness: an unseen individual playing the piano in the family chapel, and a clown-masked figure who attackes Tony with a bill-hook. To further complicate things, Eleanor's feelings toward her supposed brother began to become more amatory, which causes her distress, though one could rationalize that on some subconscious level she's aware that he's not really her brother. Tony is then invested enough to ferret out the truth: the real brother didn't commit suicide, but was killed by Simon. All of Simon's later irrational behavior springs from his guilt over the murder, and to keep him from going completely off the rails, Aunt Harriet has been donning her clown-masked outfit, which somehow convinces the crazed Simon that she's a live version of Tony. Yet on some level Simon's  aware of the truth, because he's got the mummified brother of the Real Tony (paging taxidermist Norman....) stowed away in the chapel.

Possibly the Tey novel is better on psychological acuity than Sangster's script, since none of the characters in the film hold up to close scrutiny. Harriet's costumed ritual is never really explained, though her wild attire looks forward to the more bizarre serial killers of eighties slasher films. Eleanor's brush with incest doesn't really amount to anything, since the viewer knows Fake Tony's not really her brother. Simon-- played in scenery-chewing style by Oliver Reed-- is unquestionably the central figure of the family romance, though the title "paranoiac" doesn't really apply to him. When he's explaining his crime to his listeners, he never expressly says that he killed Tony out of greed for the estate, and Sangster seems to let the audience assume that to be the case, since earlier viewers have seen him willing to put Eleanor away for  the sake of filthy lucre. Since all three Ashby offspring are supposed to be in their teens at the time of Tony's murder, I find it interesting to wonder if Simon might've murdered Tony precisely because Eleanor treated Tony as her favorite. But I confess there's nothing in the film to support reading it in a more Freudian (or Hitchcockian?) manner.
Posted by Gene Phillips at 12:36 PM
Email ThisBlogThis!Share to TwitterShare to FacebookShare to Pinterest
Labels: perilous psychos (u), phantasmal figurations (u), the uncanny