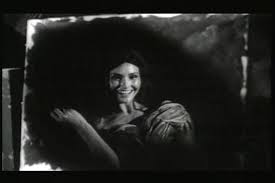 
Both the production history and the functional narrative of BLOOD BATH prove incredibly convoluted. Yet, even though the plot of this chop-shop concoction from Roger Corman's AIP company is hard to follow, there are some interesting mythic aspects to the story as a whole.

The consensus on that complicated history seems to be that first Corman bought a spy thriller shot in Yugoslavia, and then added more scenes to the footage to make it into a horror film for American release. This version, which included new scenes of actor William Campbell as a deranged painter, eventually appeared on American television as PORTRAIT OF TERROR. But prior to that, Corman wanted more changes to make the movie viable for release to cinemas.

Jack Hill was assigned to rewrite the script and to direct more new scenes, and thus he seems to be the person most responsible for the better elements of BLOOD. Hill's altered version still did not please Corman, and two years later he assigned another director. Stephanie Rothman, to shoot yet more scenes, and then BLOOD BATH finally enjoyed a general release in 1966. (To further complicate things, even more scenes were shot to pad the feature when it came to television under the alternate title TRACK OF THE VAMPIRE). Rothman's main contribution was to give Hill's mad painter a vampiric nature, though since she no longer had access to actor Campbell, she had to use another actor wearing vampire-fangs, as well as re-dubbing some of Campbell's dialogue.

More than one reviewer has noted that Hill, in moving the original film's action from Europe to Venice Beach, California, may have patterned his revision of the script after Corman's earlier directorial effort, 1959's A BUCKET OF BLOOD. At the very least Hill was probably emulating the way BUCKET's writer Charles Griffith had drawn upon California's beatnik culture as a backdrop for the murderous career of would-be sculptor Walter Paisley. Both films play upon the beatniks' reputation for exaggerated artsiness, as BLOOD shows by starting off with a scene where a pretentious beat named Max shows off his system of "quantum painting," which consists of shooting one of his own canvases with a paint-gun. That said, the beats in BLOOD come off a little better than the ones in BUCKET, and the starring psycho-killers of the two films could not be more different.

Whereas Walter Paisley has no actual artistic talent, and merely impresses his gullible audience with his counterfeit creations, Alberto Sordi hearkens back to earlier, more magisterial wax-museum fiends. At the start of the film, he's apparently been killing women and turning them into wax statues for some time, but he doesn't exhibit them, merely keeping them in his studio. Implicitly they inspire him to execute a financially-successful series of paintings known as "Dead Red Nudes," showing women both undressed and impaled.

Sordi's studio is presumably a leftover from earlier versions of the film, as is his relationship to the building, which boasts an Old World clock-tower. In a dialogue that may also recycle older elements, Sordi informs one of his intended victims that once his family owned the building, but now he's forced to live in it as a tenant, employed to keep the clock running. Possibly the clock-tower was meant to be one of those many edifices transported from Europe to the U.S. brick-by-brick, but Hill's script doesn't trouble with such details. Sordi claims that the clock has been in operation since the 11th century, except for one time, when Sordi's ancestor Erno-- also an artist-- was burned at the stake. (Presumably Hill's script had Erno accused of being a witch, which Rothman changed into accusations of vampirism.) The broad implication is that Erno's troubles also took place in the Old World, but Hill isn't overly concerned with Sordi's loss of his clan's high-class privileges.

Instead, Sordi is obsessed with Melizza, a long-dead woman who betrayed Erno Sordi to the Church. Sordi still has his ancestor's painting of Melizza, and relates to his victim the allegation that Melizza's soul was captured in the painting. As if to prove that the mistress of Erno still has some occult impact on the life of the modern artist, Sordi's currently dating Dorean (Lori Saunders), a woman who's a dead ringer for Melizza. Sordi fears the spectre of Melizza, but he's fascinated with her, imagining that she appears in his dreams (where she's of course also played by Saunders). His obsession with killing women presumably started out as the compensatory desire to wield power over females, though of course the insertion of the erratic vampire element adds another complication.

After Sordi kills the film's first-seen victim-- Daisy, who just happens to be the girlfriend of "quantum artist" Max-- Daisy's sister Donna teams up with Max to go looking for the missing woman. This allows Hill to repeat the story of Sordi's evil ancestor, at which Max scoffs. However, Sordi in his "vampire" form tracks down Donna and murders her on a merry-go-round. This could have been the film's best visual sequence, except that there are spectators on the carousel when the scene starts, all of whom mysteriously vanish during the murder.

The viewer also finds out that although Sordi has been busy killing women and turning them into his artistic property, Dorean complains that he hasn't even "made a pass" at her during their dates. Clearly, though he's drawn to the Melizza lookalike, he also fears her as his nemesis. This instinct is proven right at the end. In vampire-form Sordi tries to attack Dorean. She escapes with the help of the somewhat heroic beatniks, but then chooses to take refuge at Sordi's studio. The mad artist has reverted to his human self, but Dorean's appearance causes him to lose it. He ties her up and prepares to both kill and immortalize her. At this point, the soul of Melizza-- who took no particular exception to all the other slain women-- suddenly intervenes. She causes some of Sordi's wax-embalmed victims to rise up and force him into his own wax, while the beatniks arrive to help Dorean out of her bonds.

It's hard to say why Corman liked Rothman's interpolations of Sordi's vampirism. Rothman certainly had no space to explore the traditions of vampire fiction in this cobbled-together melange, but maybe Corman simply thought vampires were more commercial than mad painters. The element of Melizza's mystic painting, for which Hill has taken credit on Youtube, is more compelling, and one may fairly ask why the Melizza-ghost only intervenes when her modern lookalike is in danger. Hill does not enlarge on this situation, but it does seem possible that Dorean really is Melizza's descendant, even as Sordi is that of mad painter Erno, and thus Sordi's breaking a sexual injunction by attacking Dorean. What I find most enjoyable about BLOOD BATH is that Hill consistently shows everyone in his world as being fascinated with both sex and death when they're couched in the abstracted world of art. There's no fear of the "male gaze" in this world, which seems fitting for the man who later directed films like THE BIG DOLL HOUSE.  Even simple Daisy wants to see her beauty given representation, and becomes angry at Max when he does a conventional portrait of her and then ruins it with his paint-gun. Even without Rothman's changes, I doubt that Hill's original script explored the themes of transgressive art in any depth. But despite the film's flawed execution, Sordi is still an interesting monster, half indebted to the example of wax-sculptors like Henry Jarrod of HOUSE OF WAX, and half to the long shadow of Alfred Hitchcock's PSYCHO.


Posted by Gene Phillips at 2:06 PM
Email ThisBlogThis!Share to TwitterShare to FacebookShare to Pinterest
Labels: the marvelous