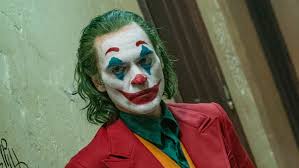 
I wasn't especially stoked to see JOKER, based on rumors that it might take some inspiration from the Moore-Bolland KILLING JOKE, of which I was not a fan. It turned out that the Todd Phillips-Scott Silver script only draws upon one aspect of the graphic novel: the idea that Batman's most notorious villain started out as a failed stand-up comic. The film's structure is much more indebted to Martin Scorcese works like TAXI DRIVER and THE KING OF COMEDY, and I'm moved to wonder if, prior to Phillips getting the nod for the directorship, he and Silver might have skewed their screenplay in the Scorcese direction specifically because the famed director was briefly attached to the project. If so, Scorcese's departure did nothing to cause Phillips and Silver to distance themselves from their inspiration. At the very least, someone behind the scenes remembered that
Robert de Niro had essayed the main role in KING OF COMEDY, that of a deranged comedian who kidnaps a talk-show host, and performed a shout-out to that film by casting de Niro in the role of a talk-show host idolized by Arthur Fleck, the Man Who Would Be Joker.

Circa 1981, Fleck (Joaquin Phoenix, who dropped a lot of weight to look as bony as the master criminal) lives in low-rent Gotham City squalor with his mother, and works as a hire-a-clown. Despite being victimized by both street-thugs and his boss, Fleck constantly tries to follow his mother's injunction to put on a happy face. In fact, he often can't help it, since he suffers from the condition of pathological laughter, of bursting out into nervous guffaws at the most inopportune moments. One such moment takes place on a subway, where Fleck, clad in his clown-gear, lets loose some involuntary chortling in the presence of three dissolute Wall Street roysterers. However, Fleck just happens to have a gun on him this time, and goes Bernhard Goetz on his tormentors.

Because Gotham City is a sinkhole, the idea of a clown-avenger strikes a chord, and protesters begin donning clown-makeup, anticipating the modern dissident's "V for Vendetta" masks. Wealthy Thomas Wayne-- father of Bruce, only twelve at this time-- excoriates the wastrels who would idolize a murderer, but this merely feeds the fires of discontent. To be sure, though Phillips's scenario has obviously taken some cues from Christopher Nolan's revision of the Batman mythos in BATMAN BEGINS, the script doesn't indulge in Nolan's empty-headed Marxism. In Phillips' Gotham, cruelty pervades all classes, and though lip service is paid to the corruption of those in high places, the people on the bottom rungs show themselves to be just as willing to kick off people further down. This marks JOKER as the Fyrean form of "the irony," in which all righteous order has departed. Even the suggestions that the heroic Batman will be birthed from this chaos don't lessen the sense of overall despair-- and in addition, this is a subcombative drama, given that this nascent form of the Joker has no real enemy to strive against.

Joaquin Phoenix is present in almost every scene, so it's entirely his movie, and it succeeds purely through his energetic presence. The last third still drags, though, as the script writes itself into a hole vis-a-vis the fatal encounter of Fleck and his talk-show idol. On a side-note, I have the same
continuity-oriented difficulty with JOKER that I did with KILLING JOKE-- that if an author makes the Joker sympathetic by imagining that he started out as a witless loser, it's nearly impossible to imagine criminal genius arising from such an unlikely source. That said, some accounts hedge the film's bets by stating that there's no proof that Fleck becomes the authentic Joker who will go up against Batman, that Fleck himself may be an inspiration to a superior fiend-- which is an "out" that Alan Moore could not have utilized.


Posted by Gene Phillips at 4:58 AM
Email ThisBlogThis!Share to TwitterShare to FacebookShare to Pinterest
Labels: outre outfits (u), perilous psychos (u), the uncanny