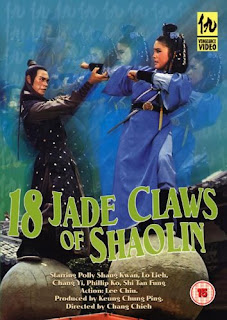 
Understandably, no one's ever made a successful mashup of the kung-fu action-genre and that of the murder-mystery. EIGHTEEN JADE ARHATS provides a good example of why even chopsocky-filmmakers never attempted this very often.

The main heroes of this fight-fu extravaganza are a justice-seeking traveler, Kung Chi Ya (Lee Jan-Wa) and a woman looking for her family's killer, Sing Pei Pei (the more celebrated kung fu diva Polly Shang Kuan). In fact, Kung seems a bit of a rogue-- he challenges Sing to a fight when they first meet, apparently just because he thinks she's cute-- but devotes himself to her cause as if it's his own. For her part Sing is perpetually aggravated by Kung, but retaliates by trying to get him in trouble. Not that either of them needs any help with that; most of the film consists of Sing and Kung being attacked by various exotic assassins, presumably sent by the unknown murderer to shut them up. I didn't catch any killers using overtly marvelous powers, just weird outfits (some assassins dress up like ghosts) or peculiar weapons (a female tries to trap Kung in a bed with a spiked canopy). Finally the killer is lured out of hiding when Sing claims to possess nine of the lost Jade Arhats (Buddha-statues) that can confer great power on adepts, but this is just a bluff, the supposedly magical statues have no more existence than the Maltese Falcon of film-fame. There's one dubious moment when Kung appears to call upon the power of *chi,* but I don't think the kung-fu move he uses qualifies as marvelous.

The starring actors make a good duo, despite the fact that there's no romance apart from the two of them sniping at each other. As chopsockies go, this one is at least colorful and lively at all times.
Posted by Gene Phillips at 8:58 AM
Email ThisBlogThis!Share to TwitterShare to FacebookShare to Pinterest
Labels: combative adventures, diabolical devices (u), outre outfits (u), the uncanny