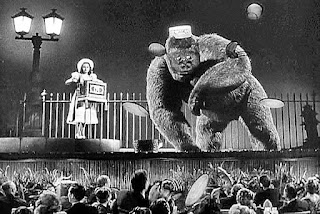 
My one-sentence review of this film: I liked it better when they called it SON OF KONG.

Obviously I don't mean that MIGHTY JOE YOUNG is a remake of the 1933 sequel to the classic KING KONG. But just as SON was a less violent film with a more genial giant, so too is JOE. It's also the last time that KONG's three major prime movers-- Cooper, Schoedsack, and O'Brien-- returned to the icon of a colossal ape-- though to be sure, without any of the prehistoric trappings.

There's also no hint of transgressive sexuality anywhere in JOE. Whereas Kong's strange amour fou toward Ann Darrow always seems strange and inexplicable, Joe orients toward his human friend Jill Young (Terry Moore) rather after the fashion of infant to mother. SON doesn't venture into deep psychological waters either, but at least there's a sort of murky father-son dynamic between "Little Kong" and Carl Denham, the man indirectly responsible for Big Kong's death. Joe Young, who starts out looking like a commonplace baby gorilla, becomes Jill's pet on her father's African farm when she's only eight. But as they both grow to maturity, Joe is almost entirely under Jill's maternal thumb, despite the fact that, for no stated reason, he grows to the unusual height of twelve feet.

Joe also proves utterly obedient to Jill even when she's seduced by two representatives of modern civilzation-- also substitutes for Carl Denham and John Driscoll-- into taking Joe to Hollywood. The older
"seducer," impresario Max O'Hara (Robert Armstrong, also returning to the Kong-well along with the three prime movers), only wants Jill and Joe to perform stunts at his African-themed nightclub, but when the two of them aren't happy in the Big Time, he ends up helping them escape a dire fate. Gregg (Ben Johnson), the younger "Driscoll" analogue, has a less figurative romantic interest in Jill. Although Joe and Gregg get off to a bad start-- Gregg almost shoots the big ape when the latter attacks O'Hara-- Jill accepts Gregg's courtship later, and Joe never turns so much as a ruffled hair in Gregg's direction.

In my SON OF KONG review I complained that the film was too contrived for me, but at least it continued the Denham  character-arc in an interesting manner. JOE is even more contrived, and while not without some melodramatic appeal, SON starts looking better by comparison. Admittedly, JOE may score somewhat better in allowing audiences more empathetic interaction with the big anthropoid, allowing them to get a taste of what Kong's fate would've looked like had he been forced to perform monkeyshines for Denham.

Joe gets a couple of physical contests in the film, playing tug-of-war with ten human musclemen, and fending off some hostile lions, but MIGHTY JOE YOUNG is even less focused on the combative value than SON OF KONG.

Posted by Gene Phillips at 10:55 AM
Email ThisBlogThis!Share to TwitterShare to FacebookShare to Pinterest
Labels: the marvelous