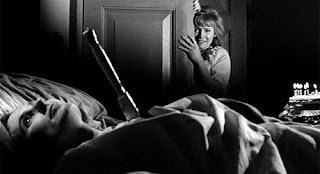 Though screenwriter Jimmy Sangster wrote a variety of "psychological thrillers" throughout his career, the five that he wrote in the early to middle sixties seem to be the ones most oriented toward imitating the commercial success of the Hitchcock oeuvre. As yet I have not reviewed the third one, 1963's MANIAC, or the fifth, 1965's HYSTERIA, but I have done so for 1961's SCREAM OF FEAR and 1962's PARANOIAC. however, and I'm going to hypothesize that 1964's NIGHTMARE is probably the best of the Hitchcockian batch.

In all five flicks, Sangster depends on some character(s) formulating an extremely complicated scheme to deceive some other character(s), presumably emulating the success of contemporaneous films like Clouzot's 1955 LES DIABOLIQUES and Hitchcock's 1958 VERTIGO. NIGHTMARE is arguably more dependent on gimcrack plotting and unbelievable coincidence than other Sangster psycho-thrillers. But no one in the sixties went to see these films for the plots; they went to see people terrified by uncanny threats, even when it was fairly clear (to the viewers) that the threat was being stage-managed by insidious schemers. NIGHTMARE is interesting in that it follows the pattern of VERTIGO by revealing the nature of the scheme roughly at the halfway point, and then allowing the viewer to watch the schemer(s) hoist on their own petard.

At the end of my PARANOIAC review I opined that its narrative didn't justify a reading along the lines of Freud, or even Hitchcock-Freud. NIGHTMARE, however, makes a clever use of subterranean symbolism, as well as placing so much emphasis on female characters that it would probably score points with ultra-feminists if the film hadn't been turned out by male authors (Freddie Francis directs, and would later re-team with Sangster for HYSTERIA).

Teenaged Janet Freeman (Jennie Linden) starts out at boarding-school, but at mid-term she's sent back to her ritzy English home because her constant nightmares disturb her dorm-mates. Back on the young woman's eleventh birthday, Janet's mother unaccountably went mad and knife-killed her husband. The mother was consigned to an asylum, and though alive, never has any direct impact on the story. However, Bughouse Mama still shows up in the dreams of teenaged Janet, inviting her to take a Walk on the Mad Side. Miss Lewis, a teacher and potential "good mother," escorts Janet to her home, which is maintained entirely by servants and whose financial affairs are overseen by a lawyer named Baxter (David Knight). In her conversation with Lewis, Janet evinces a strong desire to see Baxter again, strongly suggesting at the least a teenage crush on an older (and married) man. However, when Janet and Lewis show up at the Freeman house, they learn that Baxter has sent a new servant, Grace, who's supposed to be Janet's "companion" but who is actually a professional nurse. Being back at home, though, doesn't bring Janet any peace of mind, for she starts seeing a female spectre in the halls, but this time it's a woman Janet doesn't recognize at all. Some days later, Janet's about to celebrate another birthday, and for the first time ever, Baxter brings along his wife. Horrors! It's the weird woman Janet saw in her delirium, and Janet's terror moves her to snatch up the cake-cutting knife and stab Mrs. Baxter to death. So Janet has her fears of madness confirmed, as the law falls for the plot and consigns the teenager to an asylum (after which she's never physically seen in the film again, though her presence returns in a figurative manner).

Then it's revealed that the weird woman in the halls was Grace in disguise, and that she's conspired with Baxter to drive Janet mad in order to-- well, it's not exactly clear. Baxter's just the family lawyer, so I was never clear as to what he was going to get out of sending Janet to the crazy house. He does marry Grace in jig-time, though, as the two of them apparently not at all concerned about society's raised eyebrows. However, Janet has friends who promptly (and pretty unbelievably) gaslight the gaslighters. In reaction Grace goes so bonkers that she accuses Baxter of helping Janet escape the asylum so that Janet can kill Grace, and then she knife-kills Baxter. At the close Janet's helpers reveal to the murderess how they played her, and even reveal that (somehow) Janet has made a full recovery and is due to be released soon.

To judge by the way Sangster tosses plausibility out the window, he must have believed that his audience wouldn't fault him on the outrageous nature of either the villains' scheme or the avengers' counter-scheme. And I don't fault him either, because I'm more interested in the way NIGHTMARE incorporates Freudian psychological myths.

We don't know if Child-Janet, on the day of her eleventh birthday, nurtured any jealousy of her mother's relationship with her father. Still, the mother's murder of the father has the effect of taking away the most important man in Janet's young life. There are no suggestion that teenaged Janet has ever considered boys her own age, and, had Sangster been forced to address the issue, he could have argued that her fear about inheriting her mother's insanity would have kept her isolated from the opposite sex. The one man for whom she shows regard is Baxter, who like her late father is another older married man, though this doesn't keep her from being interested in him. Baxter and Grace apparently believe that Janet's fear of her negative maternal image is so strong that it can be transferred to another target, simply by having Grace waltz around the family abode in a mask of Mrs. Baxter.

It's not clear that Baxter is aware of Janet's feelings for him, but clearly whatever he gains from her incarceration wouldn't keep him from still exploiting her. But it's important to note that even though the scheme depends on Janet making a correlation between her mad mother and a strange female spectre given flesh, it's still interesting that by killing Mrs. Baxter, she's killing someone who could've barred Janet's access to her substitute father-figure. In the real world Janet certainly wouldn't make a full recovery after slaying an innocent woman. But in the world of psychological myth, Janet's slaying of Mrs. Baxter is also the killing of the "bad mother." Indeed, even though Janet is entirely absent from the latter half of the film, one could view the entire denouement of NIGHTMARE as a transference of Janet's psychic fear to her victimizer Grace. Janet's helpers stage-manage things so that Grace believes Janet has escaped the asylum, and that Baxter is meeting some other woman even after having married Grace. But Grace jumps to the conclusion that Janet is the other woman, and though the conclusion makes no logical sense, it makes symbolic sense. Grace, by exploiting Janet's fear of insanity, has in essence engendered her own madness, even to the point where she, unlike Janet, duplicates the husband-killing deed of the institutionalized Mrs. Freeman.

One can poke logical holes in many if not all of Alfred Hitchcock's best films. What made the "Master of Suspense" such a formidable film-presence, though, was his ability to suss out the symbolic depths of the stories he adapted to film, even if he changed some of those stories in radical ways. NIGHTMARE, though enlivened by Freddie Francis's direction, shows more facility with symbolic discourse than most of Hitchcock's imitators-- even though, for all I know, Sangster may have had no more regard for NIGHTMARE than any of his other cinematic children.

ADDENDUM: I re-scrutinized the sequences in which Baxter and Grace more or less discuss the motives for their crimes, and Sangster barely devotes any time to the subject. Baxter's main motive for wife-killing was apparently to get his wife's money, but some dialogue implies that with Janet out of the way, Baxter as executor of the estate has some control over said estate, which sounds pretty phony. But though this contrivance is suspect in the legal sense, it provides a symbolic function insofar as it gives Baxter and Grace the excuse to take over said estate, in effect usurping the positions of Janet's lost parents.
Posted by Gene Phillips at 3:50 PM
Email ThisBlogThis!Share to TwitterShare to FacebookShare to Pinterest
Labels: perilous psychos (u), phantasmal figurations (u), the uncanny