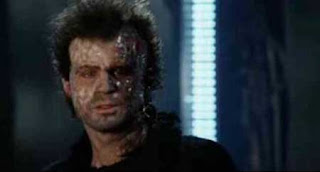 
In this review I'm pairing two films that have absolutely nothing to do with one another, except that they're both incredibly bad action-films despite having "A" level money and/or stars behind them.

So-- which is worse?

I hadn't seen DEAD HEAT since the late eighties, and screening it again only made me more aware of its shortcomings. This is one of the many "buddy cop" films popular during that decade, though most such films start out by emphasizing some incompatibility between the two officers. In contrast, sole credited writer Terry Black-- whose other credits are a handful of TV episodes-- makes Doug Bigelow (Joe Piscopo) and the punnily-named Roger Mortis (Treat Williams) almost identical in being "rule-breaker" types who perpetually aggravate their frazzled captain. It's kind of like teaming Mel Gibson with another Mel Gibson (LETHAL WEAPON appeared the previous year), with the only real difference being that Roger dresses in a natty fashion while Doug wears sporty muscle-shirts. Oh, and nothing is said about Doug's romantic history, whereas Roger has apparently had a fling with a lady mortician working for the cops.

Doug and Roger have an altercation with robbers who seem invulnerable to gunfire, but the cops manage to take out the thieves-- at which point the coroner reveals that the men seem to have already died before being killed, in that they have a special preservative in their veins. This clue causes the buddy-cops to investigate the facility from which the chemical came. During the investigation Roger is attacked by another undead killer, and as a result Roger is slain. However, by that time Doug has learned that the company has a "back from death" machine, and uses it to bring Roger back. However, the effect is not permanent, for as the investigation continues Roger's body begins to deteriorate. Eventually, the two cops-- whose belated incompatibility is that one's dead and one's alive-- find the people responsible for the reanimated robbers, one of whom is played by Vincent Price in a handful of unimpressive scenes.

By the end of the movie, even the "dead/alive" incompatibility is erased, when Doug too is zombified. But, lame though the zombie-humor is, I couldn't help feeling that the order of transformation was wrong, since Piscopo's persona in the film was edgier than that of Williams, so that the former might've been a little funnier doing dead-body jokes.

On a small psychological note, while I'm usually impatient with queer readings of films in this subgenre, I could actually see it applying here-- partly because of the cops' sartorial difference, and the fact that they end up as fellow zombies more or less stuck with one another (for all that the film's last line riffs on CASABLANCA: "I think this is the end of a beautiful friendship." 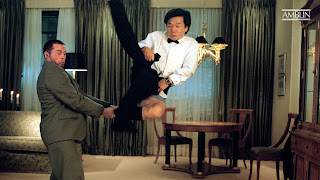 As bad as HEAT is, though, I would say THE TUXEDO is worse, perhaps because Jackie Chan has more talent in one foot than Joe Piscopo has in his whole body.

Chan plays Jimmy Tong, a Chinese-American who drives a taxi and longs after a pretty Chinese woman, though he can't work up the nerve to ask her out. He gets a job as a personal driver for a smooth fellow named Clark Devlin (Jason Isaacs). Devlin takes a fancy to Jimmy and lets Jimmy see his ritzy apartment, though he warns the driver not to touch a special case with a tuxedo inside. Their conversations suggest to Jimmy that Devlin is a James Bond-like superspy, and Jimmy asks his employer for advice on girls. Jimmy acts toward Devlin like a mentor, even though at the time Chan, pushing fifty, was almost ten years older than Isaacs.

Then Devlin appears to perish in an exploding car, and Jimmy, having only rudimentary knowledge of the spy's agenda, decides to seek out his killer. He dons the mysterious tuxedo and finds that it's a genie's lamp that can do almost anything: prompt him with the knowledge he needs in any situation, or force Jimmy's unskilled body to perform athletic wonders. By dumb luck Jimmy contacts a newbie spy from Devlin's agency, a young woman named Del (Jennifer Love Hewitt), and convinces her that he's the legendary Clark Devlin. Together they investigate a terrorist corporation out to pollute U.S. reservoirs with a fairly ingenious plot involving "water strider" insects.

As in many of his later films, Chan mugs through his part, while Hewitt tries to match his lunacy by playing her character as equally loopy. Chan's role seems like an idea that might've worked a little better for a younger actor, particularly with respect to his mooning over an unrequited love, but the actor's attempts to act cute at nearly fifty years of age are doomed from the word go. In some scenes Chan is aided by FX to accomplish his stunts, but there are enough real athletics to please the devoted Chan-fancier. But in my case, the lameness of the superspy routine and the paltry characterizations make THE TUXEDO inferior even to a dog like DEAD HEAT.

Posted by Gene Phillips at 3:22 PM
Email ThisBlogThis!Share to TwitterShare to FacebookShare to Pinterest
Labels: combative comedies, the marvelous