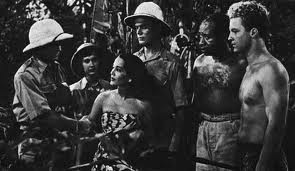 With the second and third entries in the 12-film BOMBA series, a sense of sameness already sets in. For the most part one enjoys the films largely on the virtues of the performers, without even a middling interest in the plot found in Tarzan mellers of the same period.

BOMBA ON PANTHER ISLAND is certainly the better of the two, in that it carries over the quasi-ecological theme of the first film.  The "island" of the story holds a white man's plantation, to which Bomba journeys in search of a man-killing panther (though technically Bomba's after the animal because it killed his pet monkey).  On the island, an experimental farm is worked by natives, who take orders from the callow-looking owner of the farm, Robert Maitland.  Maitland's farm is also inhabited by his tenderfoot sister Judy, who continually complains about moving back to civlization (at least until she gets a look at Bomba's pectorals) and by a French serving-girl (albeit garbed in a sarong), Losana (Lita Baron).

Losana also has a yen for Bomba, who does take out a little time from panther-hunting to let the two girls compete over him.  In fact, the film's most amusing moment shows Losana getting friendly (in a G-rated manner) with Bomba by a riverside.  Judy comes along and tries to draw Bomba away.  She fails and leaves in a huff, at which action Bomba leaves the hot saronged babe and chases after the pretty but uptight one.  Who said jungle boys had to be smart?

There's also a very minor plot-line in which the natives consider Losana to be a were-panther, which  adds an extra uncanny appeal to the story.  Accordingly this film (unlike VOLCANO) fits the trope of "phantasmal figurations," though very little happens to convince the viewer that Losana might be a cat-woman.  (She doesn't even get into a catfight with Judy!)

Callow Robert, though, does continue in the tradition of callous white invaders seen in BOMBA THE JUNGLE BOY.  In the first film, Bomba had to deal with an arrogant white hunter who refused to listen to the advice of seasoned jungle sage Commissioner Barnes.  Barnes does appear in PANTHER, advising Robert not to attempt bending the jungle to his will, but the sage quickly disappears from the story (and never appears again in a BOMBA movie).  Robert then tries to eradicate the pesky jungle with a backfire, which naturally gets out of control about the same time Bomba tracks down the killer panther.  In the end both fire and panther are cheated of their victims.  In contrast to the first film, where the arrogant white guy never admitted doing wrong, Robert does at least see the error of his ways.  Bomba then takes his leave, not even promising to call either Judy or Losana.

PANTHER doesn't have a lot of excitement or humor, but it's more than VOLCANO does.  This time Bomba, moved by loneliness, befriends David, a young white boy dwelling on yet another African plantation run by his father and mother (Marjorie Lord of MAKE ROOM FOR DADDY fame).  David's father isn't high in Bomba's book in that the former goes around capturing animals to make his bailiwick safe, animals whom Bomba sets free at every opportunity.  The parents don't believe that Bomba is real until their serving-girl Nona (Elena Verdugo, also sarong-clad!) testifies as to his existence.

After all this set-up, the villains are brought in: two white guides working for an archaeologist.  David makes the mistake of showing all three visitors a jeweled dagger given him by Bomba, taken from an apparently slumbering volcano.  (How a volcano can get lost, I'll never know!)  The archaeologist thinks the dagger can lead him to a lost city, but the guides see only the jewels.  They kidnap the boy to get him to lead them to the lost ruins, which entails assorted run-ins with Bomba until the final volcanic climax.

Aside from Bomba's release of the caged animals, there's no evocation of the other two film's quasi-ecological theme.  Serving-girl Nona is perhaps the most interesting character, as she takes an almost feral protective interest in David, even threatening one of the villains with a knife to the throat on David's behalf.  But all the rest is pretty weak tea.

CORRECTION: Contrary to what I wrote above, the character of Commissioner Barnes did re-appear, starting with 1951's ELEPHANT STAMPEDE; he's simply played by a different actor.
Posted by Gene Phillips at 2:15 PM
Email ThisBlogThis!Share to TwitterShare to FacebookShare to Pinterest
Labels: combative adventures, outre outfits (u), phantasmal figurations (u), superlative skills (u), the uncanny