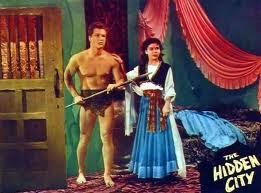 Though the third film in the Bomba series was a letdown, THE HIDDEN CITY, fourth in line, proves that it's still possible to get good value out of even the most modest productions.

CITY is a quickly-paced, occasionally humorous jungle-adventure whose only stopping point is the title.  It suggests the possibility of that old Tarzan-standby, "the lost city," which would have required sets far beyond the means of a Monogram production like this one.  Instead, the city in question-- which is never called anything but "the Hidden City"-- isn't the least bit hidden.  It seems to be nothing more than a regular Muslim city somewhere in Bomba's nebulous Africa.  Why is it called hidden, since a major plot point is that the villain takes over the governance of the city but fears retribution from some central governing body?  The film carries no answers.

Scripter Carroll Young, already a veteran of both Tarzan and Jungle Jim franchises, spins out your basic "foundling-finds-another-foundling" tale.  White hunter Johnson is our initial viewpoint character: he travels to the City to meet with its new ruler Hassan-- following the mysterious death of the previous governor and his family-- and finds out that Hassan has a mad on for the mysterious "jungle devil" Bomba.  In time the audience finds out that Bomba witnessed the killing of the old governor and his wife, though neither Bomba nor Hassan knows that the couple's child Zita escaped the assassination and lost her memory.  For amusement Hassan takes Johnson on a safari to capture Bomba, but Hassan's man has secret instructions to kill the jungle boy.  The assassin almost succeeds, but Bomba escapes.

The hero is given aid in the village of Zita (Sue England), who was herself taken in by a childless man.  However, that old scalawag hopes to please Hassan by getting him to select Zita when Hassan comes looking for a a new serving-girl.  Since the Bomba series was aimed at kids, no direct allusions are made to Hassan's lascivious plans for the new girl, but it's surely no coincidence that the villain wants him a purty girl.  He chooses Zita, but Bomba, somewhat recovered from his wound, takes her away.  Actually, the strong-willed Zita pretty much forces the dumbfounded Bomba to spirit her off, and the film gains considerable humor from the scenes in which she badgers the usually-indifferent hero into doing the right thing.

In due time, Johnson, Bomba and Zita are all on the same page as to her origins and they defeat Hassan's attempt to kill them.  There's nothing new in the film's low-level hijinks, but its quick pace and moments of humor redeem this entry.

LION HUNTERS, written by the series' frequent director Ford Beebe, is a little more on the serious side, returning to the quasi-ecological message of the first film.  Middle-aged Tom Forbes and his teen daughter Jean journey to Africa to make money capturing lions for a zoo, with the help of unscrupulous big game hunter Marty Martin.  Bomba first sees evidence of Martin's transgressions when the jungle-boy finds a wounded lion, whom Bomba must put out of its misery.  Bomba first interviews the local Masai tribe-- not seen in the series since the first film-- with whom he's on good terms.  They know nothing about the wounding and regard it as a trespass on their worship of the lions.

When Bomba finds the white-people's camp, he frees several captive lions and earns Martin's emnity.  However, on meeting Jean in the forest, Bomba seems inordinately taken with her, and tries to explain why it's wrong for people to put lions in cages just to look at.  Later Bomba illustrates his logic by putting Martin in a cage for the animals to look at.  Jean and her father begin to realize they've allied themselves to a bad fellow but can't do anything about it.

The Masai come back into the picture when Martin sees a lion attack a Masai native.  He clumsily shoots the native instead of the lion, and though he didn't intend to kill the man, he tries to use the incident to turn the natives against their worshipped totem-animals.  The plot fails-- apparently thanks to a witch-doctor who has some mild psychic skills and sees through Martin's deception.  The Masai retaliate by driving a pride of lions toward the white camp.  Bomba is forced to intervene to save Jean and her father, though naturally the despicable Martin gets it in the neck.

On a minor note, this is the first Bomba film which depicts the hero talking to birds and lions as if he has the power to commune with all animals.

Posted by Gene Phillips at 2:49 PM
Email ThisBlogThis!Share to TwitterShare to FacebookShare to Pinterest
Labels: combative adventures, outre outfits (u), superlative skills (u), the uncanny