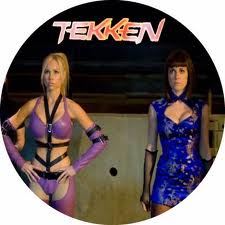 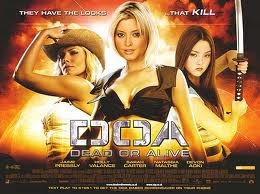 Here we have two martial arts tournament-flicks with loose SF-themes woven in.  Both have been excoriated for failing to live up to the video games that inspired them.  As I don't play video games, this alleged unfaithfulness doesn't matter to me.

Though on a whim I chose to borrow illustrations of hot kung fu babes for both films, TEKKEN, like the majority of kung-fu films, emphasizes a dark and obsessive world of male violence, even though there are a few killer babes tossed into the mix.  In contrast, DOA, focusing primarily on three female fighters who cross paths during a tournament, is considerably lighter, with more of a CHARLIE'S ANGELS tonality.

TEKKEN takes place in a future-world wherein eight corporations have taken over the world and continually strive amongst themselves for superiority by matching their martial representatives against one another.  Aside from the hero's battle with one cyborg-opponent (Gary Daniels, veteran of quite a few low-budget martial mayhem films), one doesn't see a lot of advanced technology in the TEKKEN world.  Had there been no cyborg, though, the setting alone constitutes a *marvelous* phenomenality.

The hero Jin (Jon Foo) is raised in poverty by his mother Jun (Tamlyn Tomita).  She's never explained the mysterious absence of his father, and she dies early on at the hands of enforcers sent by the Tekken Corporation.  By luck Jin defeats a fighter scheduled to represent Tekken at the Iron Fist tournament.  Tekken recruits Jin to fight in the tournament, and the hero accepts with the ulterior motive of finding his mother's killer.  After his first victory he's almost assassinated by two babe-assassins (seen above) but Jin is saved by his new girlfriend, a fighter named Christie.

At the film's first mention of the "absent father," I was pretty certain Jin would meet his pappy during the tournament; however, the script did throw me a mild curve in that said father, Kazuya by name, turns out to be the main villain rather than a sympathetic ally to the hero.  Kazuya is responsible for the assassins, as well as for attempting to pervert the Iron Fist tournament in order to have the gladiators kill one another.  One might discern a very light Oedipal theme here, in that Jin's mother is killed by his father, and that TEKKEN ends with a life-and-death battle between the two.  It may also be of mild significance that Jin's mother, a martial artist herself, trained him, and that Jin needs a little help from his fighter-girlfriend to prevail over Kazuya.  This quasi-Oedipal theme is the only reason I consider TEKKEN to possess a fair level of mythicity.

Ironically, though I rate DOA as "poor" in terms of symbolic complexity, it's a lot more fun.  As noted above, three tough girls from disparate backgrounds (Jaime Pressley, Devon Aoki and Holly Valance) are drawn into an island-bound tournament (shades of ENTER THE DRAGON!) for a substantial monetary prize offered by the insidious mastermind Donovan (Eric Roberts).  Aoki's character is motivated by a desire to find her brother, who disappeared during an earlier tournament; the brother's disappearance is later tied into the villain's fiendish plan to perfect a device that allows him to duplicate and supersede the abilities of any martial-arts fighters.

Corey Yeun, veteran of several Jet Li/Hong Kong actioners, directed this vid-game adaptation, partly filmed on a famous Hong Kong movie set in Heng Dian, China.  However, while the three actresses are all adept at the fighting-stunts given them, it's quite evident that none of them are capable of the extreme athletics of the best HK cinema battles.  Frankly, even the big warehouse battle of CHARLIE'S ANGELS: FULL THROTTLE is superior to any of the fights in DOA.  This may be one reason the film approaches the girls' battles with a comic tone, though not to the extent of ridiculing the central heroines.  Devon Aoki probably gets the best single battle, fighting a huge muscular opponent who attacks her in her hotel, while Pressley gets the most amusing battle: battling it out with her own dad (a Hulk Hogan-like wrestler) in order to prove her abilities. Finally it all winds up with a big multi-character battle in which villain Roberts, souped up by his miracle device, nearly beats all of the heroines.  He's rather comically beaten when his device is simply removed (too cheap to spring for an implant, guy?) and Aoki kills him by blowing up his entire island.

Both of these films are decent time-wasters, but fall pretty far short of the realm of great action-cinema.

Posted by Gene Phillips at 12:36 PM
Email ThisBlogThis!Share to TwitterShare to FacebookShare to Pinterest
Labels: combative adventures, the marvelous