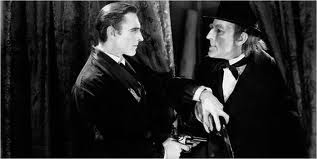 
"Life is infinitely stranger than anything which the mind of man could invent. We would not dare to conceive the things which are really mere commonplaces of existence. If we could fly out of that window hand in hand, hover over this great city, gently remove the roofs, and peep in at the queer things which are going on, the strange coincidences, the plannings, the cross-purposes, the wonderful chains of events, working through generations, and leading to the most outre results, it would make all fiction with its conventionalities and foreseen conclusions most stale and unprofitable."-- Conan Doyle, "A Case of Identity."

As an intro the 1922 SHERLOCK HOLMES begins with the first two sentences of this Doyle passage and reworks the third sentence portentously warning the audience of an impending conflict between "good and evil."  Unfortunately, there's nothing in the film-- adapting the successful William Gillette play-- to justify this attempt to evoke a mood of "strangeness."

Many of Doyle's Holmes tales inhabit a world between the naturalistic and the uncanny.  In contrast to many detectives, who seem merely clever, Holmes repeatedly conveys the impression of an all-knowing psychic.  However, this impression is always (both in original stories and media-adaptations)  quickly dispelled by Holmes himself explaining his intuitions in terms of empirical observations.  Holmes' deductive skills thus always register in the naturalistic mode and never in the uncanny.

Some of the mysteries Holmes solves do have strong elements of the uncanny, which could justify the opening appeal to the idea of life's infinite strangeness.  However, the Doyle story from which playwright Gillette largely cobbled his play's plot-- which in turn director Albert Parker followed-- isn't in this mode.   Said plot-influence stems from the very naturalistic "A Scandal in Bohemia," in which the Great Detective meets Irene Adler, a woman perhaps as clever as he is.  She seeks to keep Holmes from recovering certain incriminating love-letters which could set off an international scandal.  Parker, following the lead of Gillette, changes Adler's name to Alice Faulkner and downgrades her from the position of adversary to love-interest-- the better to place emphasis on Holmes' encounter with his famed nemesis Professor Moriarty, though said encounter takes a very different shape than the version seen in the Doyle canon.

Going on my memory of the two Doyle stories in which Moriarty is an active presence, I classify him as a naturalistic villain.  He takes on uncanny or marvelous aspects in other adaptations: the Universal film THE WOMAN IN GREEN for the first, Alan Moore's LEAGUE OF EXTRAORDINARY GENTLEMEN for the second.  But Doyle's depiction of Moriarty never goes beyond the natural, and so neither does the depiction of the character in the Albert Parker film.  Despite Moriarty being characterized as a "giant menace" by Holmes, the muddy plot never gives the audience much of an idea as to what end the villain seeks to gain.  Apparently it has something to do with having control over foreign affairs in some manner, but the script doesn't dwell on this much.

Some of Holmes' villains, notably Grimesby Roylott of "The Speckled Band," commit crimes that are weird enough to qualify as "uncanny."  But the only "bizarre crime" that this Moriarty commits is an attempt to flood Holmes' house with natural gas in order to asphixiate him-- complete with a Sadean line about how the villain wants the hero to expire slowly.  That's not quite bizarre enough in my book, and though the film strains to depict the clash of Holmes and Moriarty in Biblical terms, their personalities are too thinly drawn to sustain the hero-villain myth Doyle created.  I will note that actor Gustav von Seyffertitz is made up to look like such a Dickensian grotesque that his appearance reminds one of star Barrymore's own makeup in 1920's DOCTOR JEKYLL AND MISTER HYDE.

Speaking of Barrymore, his take on Holmes lacks much conviction.  The Gillette play takes away the image of Holmes as an oracle of empiricism.  Here he's simply a brilliant student who drifts into detecting-work (somewhat based on his image from A STUDY IN SCARLET) and who ultimately makes it his life-work to bring Moriarty to justice.  Unlike Doyle's Holmes, this one mourns some unspecified lost love, and promptly finds romantic surcease of sorrow in the character of Alice (Carol Dempster).  Many Holmes fans were aghast at seeing their confirmed-bachelor hero depicted as a romantic swain.  I'll only say that I could live with the notion if it were well done, but the romance angle of the script is pedestrian.  Moreover, Barrymore and Dempster possess zero chemistry.

The most I can say of Parker's direction is that for a film based on a stage-play, it doesn't seem excessively stagey; there are a good number of outdoor scenes that break up the talking-heads scenes.  Von Seyffertitz gives the most memorable performance, though it's noteworthy that this was the film debut of both Roland Young (in a very brief turn as Doctor Watson) and an almost unrecognizeable William Powell.