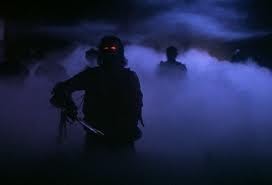 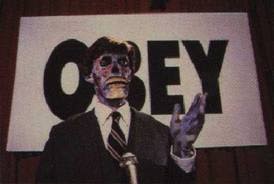 TCM's recent double-dose of John Carpenter films led me to give some thought as to why I find Carpenter's work so uneven.  Both of the films TCM showed, THE FOG and THEY LIVE, happen to be films I consider lesser efforts compared to HALLOWEEN, THE THING and BIG TROUBLE IN LITTLE CHINA.  And yet they're still interesting efforts, as opposed to works that I found pretty tedious, like VAMPIRES and PRINCE OF DARKNESS.

It may be hubristic to assign "thematic concerns" to any director with as varied a pallette as Carpenter.  I'm sure that like most directors, he picks his projects not out of lofty literary motives but as a way of anticipating what the public will buy, the better that he can continue doing the work he enjoys.  Still, I do see a prevalent motif in Carpenter's work, which takes on deeper resonance according to individual treatment-- and that motif is essentially that of his first great success, HALLOWEEN: "what happens when vulnerable mortals encounter an unstoppable force?"

Although, to be sure, the "force" can also be a "fraud," to reference the old Latin distinction between crimes of *forza* and crimes of *froda.*  THE FOG, lensed about two years after HALLOWEEN, is about an unstoppable force stalking a small community of near-defenseless individuals.  In contrast, 1988's THEY LIVE is about a pervasive fraud perpetuated upon all mankind, and so holds more in common with more insidious menaces like Carpenter's shape-changing THING.

THE FOG feels much like a recrudescent EC Comics story, particularly in terms of its extremely slow build.  Just as the small fishing-town of Antonio Bay is about to celebrate its centenary anniversay, strange things begin happening, often (though not exclusively) in connection with a bizarre fogbank.  Father Malone (Hal Holbrook) is the only one who slowly pieces together the town's guilty secret: that one of the town's founders was guilty of killing a shipload of sailors for their gold, in order to build Antonio Bay.  Soon the town is besieged by the spectres of the dead sailors, returned to avenge themselves on the figurative descendants of their slayer.

Carpenter's use of the supernatural here does attempt a certain metaphorical complexity. In a sense the rise of the vengeance-seeking corpses isn't just a routine menace, but captures the unpredictability and imponderability of man's place in the universe.  All that said, however, Carpenter doesn't succeed in diversifying his cast of characters.  Malone seems intense and tortured even before he uncovers the mystery, but his character-arc doesn't seem to have a pay-off comparable (say) to that of Father Karras in THE EXORCIST (both book and film).  Adrienne Barbeau gives a strong performance as late-night disc jockey Stevie, who beguiles her male listeners with slightly erotic come-ons (like the Greek sirens?) while in real life she's a single mom worrying about raising her son.  The irony seems intentional, yet Stevie's character-arc never comes to a good focus.  Also in the cast are Jamie Lee Curtis, Carpenter's "final girl" star from HALLOWEEN, but neither her character nor the character essayed by Curtis' real-life mother Janet Leigh seem compelling.  Because the characters lack substance, their struggles against the unstoppable powers of death lack the resonance found in the broad but intriguing cast of HALLOWEEN.  The theme of the "collective guilt of the society" never quite shapes up either.

Society is again its own worst enemy in THEY LIVE, as Carpenter pits one of his more macho protagonists against a subtle alien conspiracy.  In contrast to the kineticism of 1986's BIG TROUBLE IN LITTLE CHINA, Carpenter again builds his story slowly at the outset of LIVE, focusing on the economic travails of itinerant worker John Nada (note the name; which is Spanish for "nothing.")  Nada bums around looking for work until he happens upon a Hooverville-like community of disenfranchised workers.  Nada is bemused by some of the claims he hears about a government conspiracy, but that bemusement is nothing beside his exposure to the truth: that skull-faced aliens have infiltrated every facet of American culture, using "hidden persuaders" to encourage humans to stop thinking and conform.  Nada-- played by wrestler Roddy Piper as a not-too-bright ordinary guy-- reacts unthinkingly to this revelation by first insulting the aliens to their faces and then going after them with all guns blazing.

Whereas THE FOG is a straightforward horror-drama, LIVE is plainly an ironic satire dressed up with action-adventure spectacle.  Nada tries to open the eyes of his pacified fellow humans to their plight, but he's not exactly Mister Persuasive.  He takes a woman named Holly prisoner to get the use of her car, but she won't listen to his wild stories and ends up pushing him out of a high window.  He does get his fellow worker Frank to see the aliens, but only after Nada has a long bone-crunching hand-to-hand fight with Frank.  Eventually Frank and Nada do infiltrate the alien sanctum-- improbable, given that all the human quislings in the place dress to the nines while the two heroes look like the construction workers they are.  The film ends on a cautious positive note, in that Nada manages to expose the conspiracy.  Yet any satisfaction this ending might have is surely dulled by the audience's knowledge that their own culture may be enforcing no less conformity than the film's alien masters.

LIVE is good fun, but the brainwashing scenarios are so blatantly over-the-top that they come to seem like a cartoon adaptation of Karl Marx.  This situation isn't much helped by an in-joke in which an alien TV-pundit is seen decrying the works of "George Romero and John Carpenter."  Still, the scenes of economic depression still carry a formidable charge, particularly in today's post-meltdown economy.
Posted by Gene Phillips at 2:13 PM
Email ThisBlogThis!Share to TwitterShare to FacebookShare to Pinterest
Labels: combative ironies, the marvelous