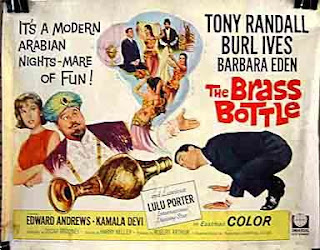 
If there's one good thing that came of my re-watching THE BRASS BOTTLE, it's that I gained a new appreciation of the oeuvre of an early fantasy-writer who wrote under the pseudonym "F. Anstey.."  I don't imagine I'll ever read his original books, but I have new respect for him, knowing that he wrote the works on which the better-than-average films VICE VERSA (1948) and ONE TOUCH OF VENUS (1948) were based.

OTOH, I can't say 1964's BOTTLE does anything for the guy's reputation.  There were two silent film adaptations of the Anstey book, both of which have been lost, but the primary significance of the surviving adaptation is its contribution to the far superior fantasy teleseries I DREAM OF JEANNIE (1965-70).

Without turning this review into a celebration of the TV series, I must say that everything BOTTLE got wrong, JEANNIE got right, to wit:

-- In BOTTLE, Tony Randall plays architect Harold, who's trying to convince his fiancee that he's put aside his carefree bachelor life in favor of settling down.  His one-note commitment to marital fidelity makes him as dull as a stick and no competition for dashing bachelor Tony Nelson, who tries not to let his genie take over his life but nevertheless often takes pleasure in having wishes granted, at least until they backfire.

--Burl Ives tries gamely to bring humor to the transgressions of the blundering genie Fakrash, but his various magical misdemeanors are predictable and, in contrast to those of Jeannie, take little advantage of the genie's "fish-out-of-water" status.

--Barbara Eden, playing Harold's fiancee, is even more one-dimensional than Harold.  It's hard to believe that the same actress did so well in the earlier-released 1964 film SEVEN FACES OF DR. LAO (where her relationship to co-star Randall was, ah, more interesting) or that roughly a year later her comedic skills would be most fully exploited with JEANNIE.

--Finally, the film even introduces-- and bungles-- the comedic possibilities inherent in a "rogue genie."  Fakrash. desperate to find some way to please his reluctant master, conjures up a female genie of surpassing beauty (Kamala Devi).  When dull Harold refuses the charms of the genie Tezra, Fakrash tries to banish Tezra back to Arabian Nightville, but she refuses to leave.  This suggests that BOTTLE will then use Tezra to ramp up the mischief level, but despite her rebellion (during which she speaks approvingly of modern monogamy as against Arabic polygamy) she never does anything.  In contrast, JEANNIE gained considerable spice through its use of troublemaking djinni, not least among them Jeannie's libidinous sister.

The ending feels pretty much like the rest of the film: again Fakrash tries and fails to please his master, this time revealing his powers to strangers, but the only thing that finally saves Harold is that Fakrash accidentally mentions that he can erase everything he's done from mortal minds.  Harold wishes that he do so, and thus the genie finally succeeds in pleasing his master, allowing a return to dull reality.

The only interesting psychological note is the association of Fakrash and Tezra.  As far as the film is concerned, Fakrash could have conjured any old Arabian hottie.  Instead he conjures up Tezra, a fellow genie with whom he once dallied-- an act which caused  him to be sealed in the bottle from which Harold freed him. If this odd exchange took place in Anstey's book, then it makes a significant comparison with a similar "exchange pattern" seen in the 1948 body-switching comedy VICE VERSA (as well as the middling 1988 remake).

Incidentally, scuttlebutt asserts that JEANNIE creator Sidney Sheldon  expressly cited the 1964 film as a direct influence on his series.  Perhaps he did so to obscure JEANNIE's indebtedness to the model of BEWWITCHED, which enjoyed great success the season before JEANNIE came out. That said, Sheldon seems to have done a good job of gleaning all the comic possibilities that BOTTLE flubbed.


Posted by Gene Phillips at 7:18 PM
Email ThisBlogThis!Share to TwitterShare to FacebookShare to Pinterest
Labels: the marvelous