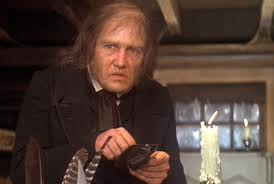 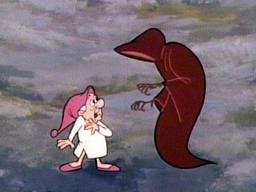 Before evaluating these two takes on the famed Dickens tale, I should note that I assigned these films, as well as the 2009 CHRISTMAS CAROL, to the category of "the marvelous."  Now, in both the original prose tale and most if not all adaptations, all of the marvelous elements in the story takes place in Ebenezer Scrooge's dreams.  Usually, this is a hallmark of the "delirous dreams and fallacious figments" trope, where a given work portrays a fantastic event as merely taking place in a dream, as with ALI BABA GOES TO TOWN.


However, in the case of CHRISTMAS CAROL and all of its faithful adaptations, I think the narrative strongly suggests that some Higher Power has intervened in Scrooge's life, rather than that he simply imagines everything, as with the Eddie Cantor-Ali Baba film.  I think CAROL leads the audience to believe in this marvelous intervention-- even though there is no decisive statement to this effect in the story-- just as in both DEAD OF NIGHT and CORRUPTION, characters experience premonitory dreams of events that seem to be poised to take place, even if the audience never actually sees said events.

(ADDENDUM 12-25-17: Over the years since I wrote this, I've totally revised my thinking here, so that I've revived the categories to reflect the uncanny status of both films. "Phantasmal figuration" applies here the same way it does in HAMLET, in that, even if one credits that something marvelous has happened, one can't know its provenance from the textual testimony.)

That said, I didn't remember much about the 1970 SCROOGE film from some earlier viewing, but it must have made no great impression on me way back when.  Now that I've seen this original musical adaptation, all I can say is-- "Humbug!"

I've admired the acting of Scrooge-star Albert Finney in almost everything else he's done, but I thought he just cruised his way through the role of Ebenezer.  He blusters at Xmas well-wishers and quails at some of the Xmas spirits as needed, but despite the fact that he won a Golden Globe for the role, I never felt he really "inhabited" the role.  I thought the same feeling of artificiality pervaded most of the other performances as well, particularly Alec Guiness playing Marley and David Collings as Cratchit.  Kenneth More makes a passable Ghost of Christmas Present, but for some bizarre reason the filmmakers selected Dame Edith Evans to be the Ghost of Christmas Past.  Dame Edith doesn't assume anything remotely like the look of Dickens' past-life ghost; she's just a prim old woman, which takes away some of the feeling of the marvelous conveyed by the original story and most adaptations.  The actor playing the Xmas Future ghost is happily rendered with the traditional cowled look, though unlike Dickens this film gives the Ghost a skull-head as it hurls Scrooge into hell (where, in an overlong and unnecessary sequence, Scrooge meets Marley for a short tour of perdition).

I found the lyrics and musical score of composer Leslie Bricusse generally forgettable, with the possible exception of the non-Dickensian sequence "Thank You Very Much," in which Scrooge hears Londoners thanking him in a merry testimonial, which turns out to be them expressing their joy at his death in the "Xmas Yet to Come" scenes.  I did note that during one song the misanthrope Scrooge complains about how people are all out to cheat one another, but several invented scenes portray the miser as a money-lender, shuttling around London and shaking down his debtors.  I'd speculate that this was a tip of the British cap to that culture's traditional hatred of usurers, which even made it into MY SON THE VAMPIRE.  However, none of the new scenes are all that clever, and Finney's performance robs the traditional Dickensian content of any mythic power.

Now, MR. MAGOO'S CHRISTMAS CAROL invents scenes as well, and for the same basic reason: to provide grist for new songs, since MAGOO'S is also a musicalized CAROL.  Jule Styne, whose imdb credits for musical composition run about three pages, delivers new takes on the old tale with such works as "Ringle Ringle" (which addresses the pleasures of money-love), "The Lord's Bright Blessing," and my favorite, "We're Despicable" (a tune sung by the leeches who have pilfered items from Scrooge's dead body).  The script also deviates from Dickens in some particulars-- for instance, it dumps Scrooge's nephew, so that the reformed miser celebrates Xmas with Bob Cratchit's family.  But overall the original writing by one Barbara Chain is meritorious.  Unlike Styne, her career as a cartoon-writer was more, ah, various: she worked on the FAMOUS ADVENTURES OF MR. MAGOO TV series, which was a direct spin-off from this carol-tale.  However, aside from that her longest credits are for the short-lived RAMBO cartoon show of the 1980s!

As MAGOO'S is a favorite cartoon that I grew up with-- and was probably my first exposure to the Dickens tale-- I'm probably not that objective about it. So, without trying to find some superficial fault that doesn't really dim my enjoyment, I'll just close with a glance at the "We're Despicable" crew. 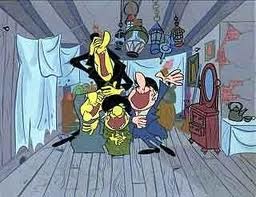 Posted by Gene Phillips at 3:25 PM
Email ThisBlogThis!Share to TwitterShare to FacebookShare to Pinterest
Labels: delirious dreams and fallacious figments (u), phantasmal figurations (u), the uncanny