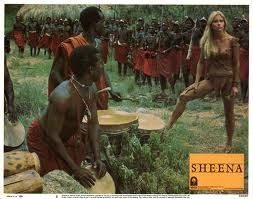 
Sheena of the Jungle, created for Fiction House Comics in 1937 by Will Eisner and Samuel Iger, was a tough babe who swung around the jungle, trouncing marauding white traders and misbehaving black tribesmen alike.  There had been jungle girls in prose and film prior to Sheena, but none of them ever exerted as much of an iconic hold as this leopard-skinned blonde goddess.  To some extent the syndicated 1955-56 TV series, starring buxom Irish McCalla, had a similar effect on 1950s viewers, though the comic's publishers had faded into the mists by the time of the TV series.  Following that series, the 1984 film was thus the first major attempt to reviving the Sheena icon.

I don't know precisely what greased the wheels for this revival, but I'd imagine it had something to do with the success of both comic-book films like SUPERMAN I and II and pulp-style adventure films like RAIDERS OF THE LOST ARK.  Unfortunately, most of the films that attempted to coattail on these big-budget successes crashed and burned.  SHEENA-- sometimes given the subtitle "QUEEN OF THE JUNGLE" though I've never seen the subtitle on any version-- was one of these.

In my kidhood I only knew Sheena very vaguely, until I encountered a few reprints of the Fiction House comics.  I admired their straightforward approach to pulp-style action.  When SHEENA was announced as a big-screen project, I didn't expect another RAIDERS, but I hoped that it would at least be a good basic action-adventure, if only on the level of the better Tarzan flicks.

To say the least, I was massively disappointed in 1984, even though SHEENA's director was John Guillerman, who in the late 1950s was responsible for making one of the best of the Tarzan films, TARZAN'S GREATEST ADVENTURE.   Although Tanya Roberts was no less buxom than Irish McCalla, both the action and dialogue, which should have been RAIDERS-snappy, had the weaknesses of the SUPERMAN films with none of the virtues.  While it's probably impossible to blame a script penned by many hands on any single writer, I suspect that the culprit was David Newman, who had worked on screenplays for the first three SUPERMAN films.  I could tell that the 1984 SHEENA was straining for profundity in place of offering the sort of strong jungle-queen action seen in the comics.

Strong plotting is not the highest virtue in action-adventure films.  Many of the best ones, from THE ADVENTURES OF CAPTAIN MARVEL to the aforementioned RAIDERS, work well by creating some "maguffin" that both heroes and villains must pursue in order to sort out their differences.  The fault of SHEENA is not that the plot is loosely constructed, but that none of the scenarios it supports are very impressive.

The opening is the only place where the film touches on the mythic with any success.  Sheena begins as a small girl named Janet, who goes along for an African adventure with her parents.  Her father, a doctor, seeks out a mysterious tribe called the Zambulis because it's rumored that their land contains a special earth able to heal almost any injury.  Almost as soon as the doctor and his family arrive in Zambuli territory, they find evidence that the healing rumor is true.  The Zambulis don't appreciate the white people snooping around their sacred grounds, but don't drive them away either.  Janet's mom and dad take it into their heads that the secret of the healing earth may lie in the local sacred mountain Gudjara, and descend into a cave to investigate it.  Gudjara, apparently more irritated than the Zambulis at these incursions, shivers in the throes of an earthquake that buries both intruders. Little Janet tries to save her parents but fails.  As the tribe arrives on the scene, they spy the orphaned Janet apparently coming out of the cave.  The tribe's female shaman then proclaims that there's an old Zambuli prophecy asserting that "when the sacred mountain cries out, a golden girl-child shall come from the depths of Gudjara"-- a girl who will grow to become the protector of the Zambulis.  The tribe thus adopts Janet, rechristening her as "Sheena," and for the rest of the film, Sheena acts pretty much as if she was in truth spawned by the mountain, frolicing with animals and making no further reference to her lost parents.

As origins go, this isn't a bad one, though it has only minor points in common with the one from the comic books.  The 1984 film does expunge any sense that Sheena might be worshipped as a "white goddess," as was the case with many of the original Sheena's predecessors: instead, the white heroine is simply a protector to a marginalized tribe, thus removing the stigma of the "superstitious African."  Further, the healing earth isn't the only real magic in Zambuli country: the tribal sorceress's visions are real, and she has a talent for telepathically summoning animals, a talent she teaches to Sheena.  The only major problem with this section of the film is the decision of the writers to name the tribe's shaman "Shaman."  As most readers of this review will know, this is not a word of African origin. It's about as ridiculous as inventing a Celtic wizard and naming him "Houngan."

Shaman's next vision sets up the action for Sheena to venture out of her Edenic world.  The sorceress foresees that someone will try to assassinate the king of their land of Tigora realm, and that this will result in the oppression of the Zambulis.  Shaman goes to the city in the hope of warning the king.  However, she first encounters the two conspirators planning the assassination: the king's envious brother  Prince Otwani and his evil lady-love Zanda (who styles herself, a little risibly, as "the most wicked woman in Tigora.") These villains decide to use Shaman as a fall guy, and after they pull off the king's murder they try to blame it on Shaman and her tribe.

Two heroic figures interfere with their plans.  First is reporter Vic Casey, who accidentally obtain proof that Otwani and Zanda are the real assassins.  Second, Sheena, summoned by the mental waves of the imprisoned Shaman, comes to Shaman's rescue with an animal army (possibly the most enjoyable action-scene in the film).  With a little help from Vic, who's enamored with the jungle-girl at first sight, Sheena spirits Shaman out of the city, but to no avail: Shaman dies and charges Sheena with protecting the tribe against Otwani.  Meanwhile Vic chases down Sheena and manages to tag along with her as she tries to return to her people and rouse them back to their long-forgotten ways of war to fight their enemy.  On the way Sheena and Vic enjoy a little romance.

As I said before, there's nothing wrong with a loose plot-structure for an adventure-film.  The plot is reasonably functional, with Otwani chasing Vic to get the incriminating evidence and chasing Sheena to keep her from warning her people, whom Otwani plans to scapegoat.  There's even a minor subplot about Otwani giving Sheena lustful looks, so that jealous Zanda tries to kill the heroine and makes it possible for Sheena to win free.  Sheena does lead her tribe against Otwani's armed soldiers, defeating machine guns with rocks and arrows (remember, this came out one year after RETURN OF THE JEDI).  Sheena and Vic have a final confrontation with Otwani: Otwani dies but Vic almost perishes as well.  Only the healing earth saves him-- a nice circular return to the imagery the film starts with.  Sheena plans to leave with Vic to see the outside world, but Vic nobly tells her that her native beauty would be despoiled by the vulgar world of modern man.  (Yeah, dude, that sounds like a good excuse for ditching your booty call.)  Vic leaves and Sheena remains in the tribal world, riding her pet zebra.

Everything I've described works well enough in terms of pure function.  The problem is, there's no fire to any of it: nothing that makes one want to embrace the fantasy.  The scripting by the four writers (one of whom is BATMAN's Lorenzo Semple Jr.) is usually heavy-handed and graceless, though thankfully, not usually "campy."  The romance-scenes between Sheena and Vic are tedious despite some brief scenes with Tanya Robert's bared breasts.  But most of all, the idea of Sheena as an unblemished jungle-dwelling virginal presence simply robs the central character of any power. The comic-book Sheena wasn't especially complex, but she was marvelously tough and could endure any number of knocks on the head before rocketing back to trounce the villains.  Even had the producers selected some actress less willowy than Tanya Roberts-- say, Sandahl Bergman-- I believe their Sheena would still have come across as a "weak sister."

On a minor sociological note, Otwani is an African who seems to have been entirely Americanized, without a trace of African culture in him.  Apparently the fame he obtained from playing football in America went to his head and created in him the desire to supplant his brother.  Usually African villains in jungle-films tend to go the other way-- reactionary defenders of tribal ways-- so seeing an African transformed into an "Ugly Black American" has a small degree of appeal.

The original comic-book Sheena, who had no super-powers and only rarely encountered supernormal threats, fits my "uncanny category" under the trope of "outre outfits skills and devices." This Sheena dwells in a more fantastic world of telepathy, healing dirt and prophecies that come true, so the film itself falls into the "marvelous" category.  The 2000-02 SHEENA teleseries borrowed several ideas from the movie.  That Sheena (Gena Lee Nolin) goes from being a telepath to a shapeshifter, but keeps approximately the same costume (no leopard-skin bikini again, doggone it) and the idea of a female teacher who initates the white heroine into the tribe.  Thankfully, Nolin's Sheena does know how to roughhouse as well as the Fiction House Sheena, so the appeal of the original comic book got some props in that series as well.


Posted by Gene Phillips at 1:45 PM
Email ThisBlogThis!Share to TwitterShare to FacebookShare to Pinterest
Labels: combative adventures, the marvelous