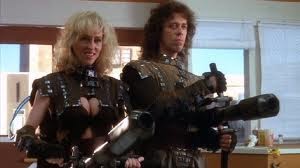 I decided to watch all four of the "Critters" franchise this week, though so far I've only made it through one and two.  Three and four will probably follow tomorrow.
My first observation is that though I've seen a lot of reviewers label this franchise as a "horror-comedy," I don't really think "comedy" fits the bill here.  Like the GREMLINS films that may or may not have influenced the property (Stephen Herek, writer and director on the first CRITTERS, has denied the influence), tongue-in-cheek moments abound.  Yet the films never completely lose track of the real menace of the titular monsters, best described as a cross between a porcupine and a tumbleweed.  The immediate image of the creatures tucking themselves into balls and rolling at their adversaries starts out as mildly funny, but when they sink their teeth in human flesh, the films quickly jump back into the terrain of the horror-drama.  Unlike true comedies, whose first priority is to belittle more than to expel their villains, the CRITTERS films are all about coming up with a nasty-looking face of evil and then beating the hell out of it.

In the first film, the protagonist is middle-school-age Brad Brown (Scott Grimes, also in CRITTERS 2).  As the youngest kid he's somewhat under the thumb of his teen sister April, and his parental units don't quite seem to understand.  Brad has a friendly relationship with town drunk Charlie (Don Opper, who stayed with all four films in the franchise), and even takes a punishment from his parents to protect Charlie.  The relationship doesn't get a lot of screen-time, for the script keeps things moving, but it helps establish that Brad's the focal "good guy" of the story.  Brad's at the right age where he feels like proving himself in a cosmic crisis but he's still being badgered about getting good grades in school.

Then Brad's small midwestern town is beseiged by the Crites/Critters, out to do nothing but eat anything and anyone, and then breed more hungry Crites.  The omnivorous spineballs are pursued by two alien bounty hunters, the risibly named Ug and Lee.  On their way to Earth they check out Earth's broadcasts, for being shapechangers they plan to assume Earthlike forms and "blend in"-- though in practice they don't really seem to care about passing for human once they start creating almost as much carnage as the Critters.  Ug immediately "likes" the form of a handsome male pop star and keeps that form for the remainder of this film and its sequel.  Lee, whose character is one of the film's main sources of comedy relief, can't seem to settle on a particular form and keeps changing his looks during both 1 and 2.  Without getting overly analytical, I don't think it's coincidence that the figures which will come to the rescue of Brad and his family are two gun-toting images of power: one a heroic, definably-masculine figure and the other a more amorphous "chameleon" type.  It's also not coincidence that Charley, the image of masculine failure, is redeemed by the bounty hunters, joining their ranks after the Critters are vanquished.  But to be sure, the main attraction of CRITTERS is watching all the ways the pillbug predators can get blown away.  The beasties seem to be defeated by film's end but leave some of their eggs around to prepare the way for a sequel.

CRITTERS 2, directed by Mick Garris, is not quite as sharp in its balance of humor and danger, but has some acceptable thrills.  Brad's mom, pop and sis are written out of the story, as teenager Brad, having been absent from the town for a while, comes back to visit his grandmother at Easter -- just in time for the hatching of the fiendish furballs.  There are some minor subplots, such as the introduction of a potential love-interest for Brad, and the question as to whether or not the sheriff from the original film (M. Emmet Walsh the first time, Barry Corbin this time round) will return in time to help blast some roly-poly runts.  Charley and his two bounty-hunting buddies come back and recycle the jokes about Lee changing his shape.  This time Lee runs the gamut from Eddie Deezen to a hot blonde.  Apparently some scripter got tired of the routine, though, because the chame-Lee-on gets his chimes rung this time out.  Brad, having proved himself in the first opus, finds that a hero ain't nuthin' but a sandwich when some of the townsfolk blame him for the return of the manic munch-monsters, but he finally convinces them to help destroy the marauding midgets once again.

Sequels often tend to repeat successful bits of story-business without substantial improvement, but CRITTERS 2 makes one improvement on the original.  In Film 1, there's a scene where a pretentious preacher is lecturing to his congregation on "Sodom and Gomorrah," whereupon an out-of-control car crashes through the church-wall. Maybe the fall of the church-walls was supposed to parallel the fall of the ancient Biblical cities, but in any case, it didn't work that well.  In Film 2, just as the preacher is reading a passage referring to a figure in white (the resurrected Jesus), a figure in white crashes through the church-window-- though this one is that other dominant image of Easter: a man in an Easter Bunny suit who's just been bit to death by the Critters.  If I were rating CRITTERS 2 I'd give it an extra star just for that moment of black humor.

Posted by Gene Phillips at 3:27 PM
Email ThisBlogThis!Share to TwitterShare to FacebookShare to Pinterest
Labels: the marvelous