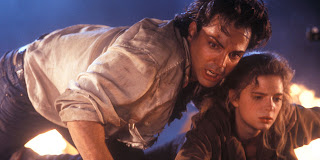 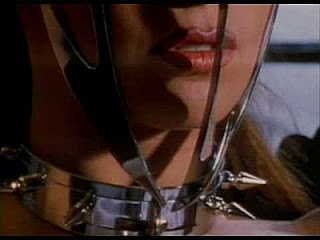 I'm frequently appalled by IMDB reviews that take certain films-- films I regard as ordinary but spirited formula-works-- and treat them as if their mediocrity was an offense against nature.  I've often thought said posters need to be introduced to REALLY bad films to give them some perspective.

Take, for a compare and contrast example, two very lightweight films, both vaguely superhero-ish (if like me you include the superspies in with the superheroes): William Dear's IF LOOKS COULD KILL (with a screenplay by 90210 creator Darren Star) and Lawrence Lanoff's THE CHOSEN ONE.

Admittedly, though both are B-films in substance, LOOKS has a fair amount of money behind it, making for decent explosions, fast car-driving, and other copious spy-movie FX.  CHOSEN looks like it was filmed for whatever the creators could cull out of the wishing fountain.  A lot of small-time productions have proven clever about getting a lot of bang over very small bucks.  CHOSEN is not among their number.

Back to LOOKS: this was one of a handful of 1990s films that promoted Richard Grieco, heartthrob of TV series 21 JUMP STREET, as a possible big-screen star.  Obviously for whatever reason he didn't grab the viewing public, though I think he's fairly charming in this "Brat Pack-spy" concoction.  Like screenwriter Star's most prominent TV successes, LOOKS is all about G-rated sex.  Here it's a young hot-looking American having adventures in Europe with hot Euro ladies (Gabrielle Anwar, Carole Davis) and obnoxious, borderline-campy villains-- Roger Rees and an apparently slumming Linda Hunt.

(Some twenty years later, Linda Hunt now portrays a more beneficient spy-type in TV's NCIS: LOS ANGELES-- and yes, I know the TV-character's not a spy as such, but the NCIS shows definitely inhabit a grey area between spywork and copwork.)

A confusion of identities causes high-schooler Michael (Grieco) to be pulled into various spyjinks involving Rees' threat to dominate the European financial world-- you know, back when there was something left of it to dominate.  There are just enough wild sci-fi gadgets in the story to propel this tale into the category of the marvelous, particularly when Grieco dons special shoes that let him walk down the side of a wall.

There's not an original idea in the mix, but the actors manage to have fun with it without falling into self-parody.  The closest thing LOOKS has to any sort of theme *might* be in your basic spy-world "clash of cultures," but I'm not arguing it very vigorously.

CHOSEN ONE, however, is the film to which I'd send anyone who heaped opprobrium on a mild formula-item like LOOKS.  CHOSEN is poorly directed, poorly photographed hokum from a guy whose main credits consist of Playboy "video documentaries."  Surprisingly, Lanoff has one other genre credit: a supernatural-possession tale called TEMPTRESS with Kim Delaney.  TEMPTRESS was dull but CHOSEN is in a boredom category all its own.

Short and sweet: after Carmen Electra's sister is killed, Carmen finds out that the sister was some sort of Amerindian superhero/tribal protector, "The Raven."  Carmen also finds out that she's got to take over the burder of being the tribe's new superhero, though of course neither sister looks the least bit like a Native American.  Whatever powers the sister had are transferred to Carmen through a talisman, but unfortunately they also get transferred to Bad Girl Debra Xavier.  After many long softcore exhibition-scenes (only a few of which include actual sex), Carmen-- who has donned perhaps the worst superhero costume this side of Halle Berry's CATWOMAN (see above illo)-- fights Debra and wins.  The End.

Like most persons who peruse softcore films, I certainly don't expect superior plotting, as no one rents these films for the plots.  In fact, such films are best served by plots which are substantially invisible, providing quick setups that allow transition from one scene to another.  However, Lanoff and his scripters blunder by trying to justify Carmen Electra's new tribe-protector identity by including lots of ponderous voice-overs by the Native American father of the two sisters (who's never a character in the film as such).  The voice-overs are apparently there just to fill the viewer in on the mythic psuedo-Indian powers inherited by Carmen and Debra, but this tactic unfortunatly may instill the viewer with some small expectation that there ought to be a *visible* plot.  For instance, there are apparently a bunch of drug-smugglers running around the town where the sister dies, but they never really have much of anything to do with the conflict between Carmen and Debra, which mainly springs from their mutual regard for a hunky sheriff.

Further, this is probably the most anemic superhero film of all time, with but one poorly-choreographed fight at the end.  Even CATWOMAN sported some strong capoeira moves.

Perhaps the unkindest cut I can give CHOSEN is to say that even though it sports some nudity (though purportedly body doubles stand in for its star), the fully-clothed seduction-scene between Carole Davis and Richard Grieco in LOOKS is more enjoyable than anything in Lanoff's limp entry.

Posted by Gene Phillips at 3:20 PM
Email ThisBlogThis!Share to TwitterShare to FacebookShare to Pinterest
Labels: combative adventures, the marvelous