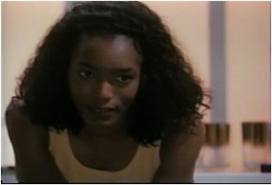 Above are Leonardo Di Caprio from CRITTERS 3 and Angela Bassett from CRITTERS 4 because nearly the only pleasure offered by these two bland by-the-numbers flicks is that of spotting actors who were stuck making bad monster-flicks before they hit the big time.

The first two films in the CRITTERS franchise were the up side of popular filmmaking: they were simple but fun exercises in humorous mayhem.  Films 3 and 4 are the down side, where talent is pretty much wasted in uninspired potboilers.

CRITTERS 3, which has the distinction of a female director, one Kristine Peterson, makes a feeble effort to change the focus with a new extended family for the munching monsters to menace.  Reversing the trend of the first film, this time a teen girl is the dramatic focus.  Annie's widowed father plans to go back on the road for his job but doesn't want to take Annie and her little brother with him.  He takes her to the big city to be raised in an apartment by an elderly couple, one of whom has a thing about alien invasions.  Annie's pretty upset about being forced to lose contact with her only parental unit but not as upset as she gets when she and the rest of the tenants learn that the apartment building is infested with-- Critters!!

This is the straight-to-video equivalent of a television "bottle show," where for some reason the characters are all stuck in one location and can't get out while they battle some menace or other.  There's a very small sociological theme in that all the apartment's tenants are in danger of being put on the street by a cruel landlord, who just happens to be the stepfather of DiCaprio's character, who is in his turn a potential love-interest for Annie.  But once the Critters start munching, there's really no further exploration of the exploited lower classes, nor does a potential romance between the widower and a telephone linewoman get going.  Happily, the evil landlord is one of the monsters' first victims, so the Critters end up doing the humans a favor, if you set aside almost eating them all.  The character of Charlie from the first two films appears at the film's outset to utter dire warnings to the kids, and later makes it to the tenement to help them fight the alien porcu-hogs, who aren't overly scary or funny this time out.  A coda sets up a sequel: Charlie's about to destroy the last Crite eggs when he gets a holographic message from his old spacefaring buddy Ug.  Ug warns that Charley can't destroy the Crites as they're the last of their kind, and then sends a space-pod to collect the eggs.  To be continued...

...in one of the worst in the very crowded field of ALIEN ripoffs.  CRITTERS 4 is the only directorial credit on imdb for Rupert Harvey, also credited with the script for Film 3, and it's a mixed blessing that at least this was his only such film.  Picking up from the third film, Charley pilots the pod with its burden of Crite eggs into space, intending to rendezvouz with his old pal Ug.  Something goes awry and Charlie ends up being put in suspended animation for 53 years, until he's picked up by a decrepit spaceship crewed by Harvey's sad-sack version of the crew of the Nostromo.  Most of the characters are tedious though Angela Bassett displays a sexy presence, so it's a shame that Harvey didn't opt to imitate ALIENS instead and make her the central heroine of CRITTERS 4.  Charley is morose to find out that by this time everyone he knew on Earth will have died, but by that time the Critters are loose again-- on top of which the freighter-crew begins to suspect governmental hanky-panky.  In a schtick lifted from the original ALIEN, it turns out that the government's trying to breed super-predators, which is why their emissary Ug really insisted on preserving the species.  Ug himself shows up on the spaceship to collect the Criters and/or their eggs.  He's no longer the humorously-destructive good guy of the first two films; he's simply the tool of the government.  Charlie's horrified; Ug explains merely by saying, "Things change."  Eventually the most sympathetic of the crew-members, along with Charley, escape the ship as it blows up with Ug, his soldiers and whatever may remain of the Critters.

Aside from Angela Bassett, about the only mild entertainment offered by CRITTERS 4 was some byplay with the ship's willful computer.  With any luck, the current rash of horror-remakes will ignore this franchise.
Posted by Gene Phillips at 3:04 PM
Email ThisBlogThis!Share to TwitterShare to FacebookShare to Pinterest
Labels: the marvelous