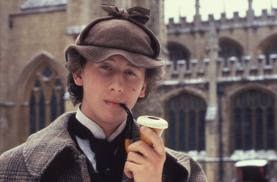 
YOUNG SHERLOCK HOLMES isn't technically a hybrid of genres, like BILLY THE KID VS. DRACULA, but it feels like one, being a patchwork of influences from other films: sort of INDIANA JONES AND THE TEMPLE OF DOOM meets THE GOONIES-- where the "goony" kids are juvenile versions of Sherlock Holmes and John Watson.

I've never looked into the history of the film's genesis.  I doubt it was a dream project for director Barry Levinson, who would soon make his mark with more realistic fare like GOOD MORNING VIETNAM and RAIN MAN.  As for Steven Spielberg, he only served as executive producer on HOLMES.  I'd speculate that the idea might've sprung from HOLMES writer Chris Columbus, also the writer of the screenplay for Spielberg's GOONIES tale, which arrived in theaters about six months before HOLMES.  Given that Spielberg's TEMPLE OF DOOM had been a big (if controversial) hit the previous year, the idea of combining juvenile protagonists with evil cults and wild pulp action-- plus the name-recognition of the Holmes icon-- must have seemed a natural to someone.

A pulpish Sherlock Holmes isn't a total derangement of the Doyle character, in that a few of the canonical stories get fairly wild-and-woolly.  Still, the the majority of the Doyle tales are ratiocinative exercises which fit the mythos of "drama" better than that of "adventure."  In this film Holmes' detective efforts are no more than cues to initiate new outbursts of extravagant action, rather than pieces of a well-made puzzle.

The plot bears a loose resemblance to Doyle's SIGN OF FOUR.  In that novel, the members of a secretive group, all of whom profited by smuggling a treasure out of India during the period of the Mutiny, are being killed one by one by a mysterious malefactor.  Here, something similar obtains; certain residents of London begin dying as a result of having wild hallucinations that end up claiming their lives.  The juvenile Holmes and Watson become involved because one of the first victims is the father of Holmes' girlfriend Elizabeth (more on whom later).  Their roundabout pursuit of the criminals eventually leads the heroes to an Egyptian cult (albeit one made up of disaffected Englishmen) and results in a myriad of lively set-pieces that would not be out of place in an Indiana Jones film.  (Actually, I like them better than some of the ones selected for LAST CRUSADE, which I've always found rather anemic.)

The base idea of depicting Holmes and Watson as teenagers might not be beyond all redemption, but even if hardcore fans could get past the concept's first violation of Canon (changing the way in which the Great Detective met his confidante), I doubt if any of them appreciated seeing Sherlock depicted as a brilliant but overly emotional teenager.  Columbus' script tries to have it both ways: depicting Holmes with enough emotionality to please modern audiences, but positing that the experiences of this story cause him to formulate his low-affect persona in adulthood.  Indeed, one of his schoolteachers, fencing-master Rathe, encourages young Holmes to become as emotionally controlled as possible-- which gives away pretty early in the game that he's more than a simple teacher.  As mentioned before, young Holmes also has a girlfriend whose nugatory characterization pretty much screams "sacrificial victim."  By film's end she takes a dirt nap in order to provide a pedestrian, psuedo-romantic reason for the mature Holmes' disinterest in women.

Columbus is of course far from the first pastiche-artist to attempt psychologizing Sherlock Holmes.  One scenario put forth by Michael Kurland was that Holmes' obsession with Moriarty in HIS LAST BOW stemmed from an extramarital affair between Moriarty and Holmes' mother.  Columbus' script touches on similar territory.  During one sequence Holmes, Watson and the girl are all exposed to the illusion-potion.  The illusions seen by the girl prefigures her own moribund destiny, and those seen by Watson are played for comedy (a pudgy kid, Watson is attacked by animated confections in the movie's most ill-fitting scene).  Holmes, however, experiences a loose rewriting of Freud's Primal Scene, for he relives an experience in which he "detected" his father's infidelity and his mother's disgrace-- though this trauma from the past seems to have done little to remove Sherlock's passion for detection.

This motif of the hero being psychologically distant from his real father was seen later in another Spielberg-associated work, 1989s INDIANA JONES AND THE LAST CRUSADE, opening the possibility that Columbus' "origin of Holmes" had a decided effect on that film's "origin of Jones."  As Holmes pursues clues to the mysterious Egyptian cult, he finds that it had its roots in the evils of British imperialism.  The murdered men undertook a money-making project in Egypt (where labor was cheap).  They accidentally uncovered a buried Egyptian tomb, and when local Egyptians protested the tomb's despoilment, a whole townful of natives were slain by overzealous British forces.  But an Egyptian named Eh Tar escaped the chaos, and after 10-15 years of effort, he built the cult and devised the illusion-making potion to avenge himself on the Englishmen.

Aside from this anti-imperialist theme-- again, probably extrapolated from SIGN OF FOUR-- the most interesting thing about YOUNG SHERLOCK HOLMES is that his enemy becomes his mentor, which was also a prominent theme in LAST CRUSADE, authored by George Lucas and two other scripters.  The patrician fencing-master Rathe is pretty much the only likely suspect to be the mystery villain, even without the jokey rearrangement of his name into "Eh Tar."  In the final scene, some time after the hero conquers the villain, Sherlock dons the cloak of his adversary, telling Watson that it's like a "leopard's skin" trophy.  (Could he have meant to reference the Greek Heracles' donning of the skin of the Nemean Lion after hero killed beast?)  However, following the credits the viewer learns that this film will not be the last encounter of the hero and his "bad father," for Rathe survives to take on the name of Moriarty.

I have only contempt for the Spielberg-Haters who revile him as juvenile, imitative, etc.  Still, Spielberg's particular genius doesn't lend itself to working and playing well with other people's material, as seen in HOOK, WAR OF THE WORLDS, TWILIGHT ZONE and most though not all of his adaptations.  The most one can say for HOLMES is that it's far from the worst depiction Sherlock's ever had in the Case of the Public Domain Detective.

Posted by Gene Phillips at 8:22 AM
Email ThisBlogThis!Share to TwitterShare to FacebookShare to Pinterest
Labels: bizarre crimes and crimefighting (u), combative adventures, enthralling hypnotism and illusionism (u), the uncanny, weird families and societies (u)