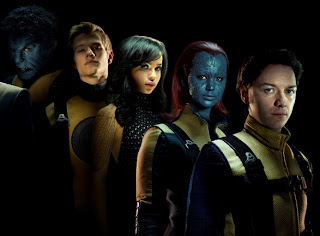 X-MEN FIRST CLASS-- loosely modeled on a comic book depicting the early years of the 1960s X-Men superhero team-- is a definite improvement upon the previous entry in the franchise-- the one that tried to force Deadpool down the throats of middle America.  However, as with X-MEN ORIGINS WOLVERINE, CLASS gives the impression of too many superheroes spoiling the cookery.

In the DVD's promotional materials, someone comments that director Matthew Vaughn, who had subordinate directing duties on X3, was the perfect choice for CLASS because he possessed the chops to deliver both superhero action and the "tonality" of the complicated character interrelationships.  Half of that statement is true: Vaughn (also credited as a CLASS writer) does a fine job with all the character scenes.  Since former X-director Bryan Singer was credited with input into the story as well as having a producer credit, one may assume that Vaughn followed Singer's successful model to some extent.  However, though X3's director Brett Ratner was excoriated in some circles for the lack of character moments, Ratner delivered far more kickass visual moments than Vaughn-- which is ironic since prior to CLASS Vaughn's most noteworthy project was his adaptation of the graphic novel KICK-ASS.

The central storyline in CLASS deals with depicting the complex "friendly enemies" relationship between the X-Men's leader Charles Xavier and his sometime ally Magneto, aka Eric Lensherr.  In this iteration Lensherr joins Xavier in the quest to both protect and recruit mutants in order to preserve them from the dangers of regular humanity.  Lensherr, however, has a darker past than Xavier, for in keeping with his revised origin from X-MEN (2000), he was subjected to the horrors of the Holocaust during World War II.

During his internment in a concentration camp, Lensherr becomes an experiment for a sadistic madman named Sebastian Shaw.  Shaw recognizes Lensherr's mutant magnetic powers and attempts to develop them, though it's not clear what use Shaw hoped to make of such power.  Despite a truly "hard knocks" method of instruction-- Shaw shoots Lensherr's mother in front of the boy's eyes-- Shaw fails to do anything but give the future villain the desire to hunt Shaw down like a dog.  In the process of doing so, Lensherr will unconsciously model many if not all of his future actions after those of Shaw.  In the 1960s, during which the majority of the story takes place, Shaw forms the Hellfire Club in order to manipulate young mutants to serve his will.  After losing all faith in Xavier's meliorist plans, Lensherr will do the same.  Shaw, becoming aware that he might be vulnerable to Xavier's mental powers, dons a helmet to protect him against mental influence; as viewers of the earlier films will recognize, Lensherr-as-Magneto will don either the same helmet or a copy thereof.  There's even a loose parallel between the fact that each man has a "femme fatale" as a right-hand "man."  Shaw has the White Queen (or a facsimile thereof).   In the first Singer films Magneto's second-in-command is the sexy shapechanger Mystique, but in CLASS we learn that Lensherr essentially seduced her away from Xavier-- though as it happens the high-minded mutant leader only considered Mystique a sister-like confidante.

I've nothing against this sort of rewriting of history, but Vaughn's script doesn't allow any room for Shaw to be anything but an anticipation of Magneto.  His big plan-- to foment war between the U.S. and the USSR during the era of the Cuban Missile Crisis-- allows the film to reflect back on the tensions of the time but it doesn't seem to yield Shaw any tangible advantage.  At least in a real 1960s artifact like FANTASTIC FOUR #22, where the Mole Man tries to execute the same essential doomsday scenario, the villain's able to hide from the conflagration beneath the earth.

The original comic book series FIRST CLASS dealt with the charter members of the 1960s group, but for whatever reason, Vaughn and his collaborators chose to emphasize a bunch of new kids on the block.  This did allow for their crucial rewriting of Mystique's relationship to Xavier and Lensherr, but the other "new kids" don't fit the mold quite as well.  Here the only character who actually appeared in the 1960s X-MEN comic is the Beast, who starts out as a human being with big feet but mutates himself into a hairy monster.  This takes elements of the Beast's solo 1970s series and melds it with the X3 film's idea of a "mutant cure."  However, the Beast's arc never shows much pay-off, apart from playing around with the notion that in his blue-furred persona he might have become interested in blue-skinned Mystique.

Alex Summers/Havok is merely there to fill in for his brother Scott/Cyclops, possibly because the writers didn't want to deal further with the Cyclops continuity confusion engendered by the WOLVERINE film.  Banshee, a charter member of the record-breaking 1970s group, has no real characterization and is used mostly for comedy relief during his first attempts to fly.  Angel, a butterfly-winged female borrowed (sans any characterization) from the Grant Morrison X-MEN run, is used to be one of Xavier's pupils whom Shaw manages to "turn"-- which is pretty much a reprise of a similar Singeresque development in X2.  Lastly comes a character named "Darwin," whose comic book original isn't familiar to me.  He's given little characterization and his death-- principally to prove that the villains are badasses-- only served to infuriate audiences because the first hero killed was a person of color.  For all of me, they could have killed Havok or Banshee just as easily, though Darwin's power in the film seems the least interesting of the three.

There are many good continuity hat-tips all through the film.  I'm particularly fond of a bit where Xavier's lover Moira is first to suggest that he call his group "X-Men" as a logical development of their not being "G-Men," or "government men."  There are, as in the comics, many minatory pronouncements about the evils of racism, judging by appearances, and totalitarian government.  They're enjoyable enough, but like most of the film they feel a little derivative.  In contrast to X2-- still the best film in this series-- CLASS has no superlative sequences that set it apart from others of its kind.
Posted by Gene Phillips at 1:26 PM
Email ThisBlogThis!Share to TwitterShare to FacebookShare to Pinterest
Labels: combative adventures, the marvelous