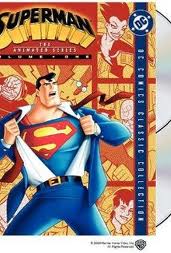 I didn't care much for this original animated TV series when it first ran, but I decided to give it another try, watching all the episodes off-and-on over the course of a few weeks.

My verdict is not much different than before.  Credited series-developers Alan Burnett, Paul Dini and Bruce Timm merely go on the end of a long list of creators who don't "get" Superman.

That doesn't mean that I think that there's a single unitary approach to the DC character.  But in order to produce good Superman stories, one has to come off with some insight into either Superman or members of his support-cast.  What the animation team produced-- in vivid contrast to their stellar work on BATMAN: THE ANIMATED SERIES-- was a work that looks good on the surface but whose plots and characters remain "super" only in one way-- "superficial."

The three-part introduction is perhaps the most tantalizing, suggesting some of the directions the producers might have taken (always admitting that they may have been hamstrung by DC Comics, eternally protective of their flagship character).  For instance, the comic-book Brainiac-- debuting in 1958 in a story by Otto Binder and Al Plastino-- plays off some of the same archetypal myth-motifs Siegel and Shuster used for their hero Superman.  Whereas Superman was the heroic survivor of a world calamity, after the fashion of "flood heroes" like Noah and Manu, the original Brainiac was symbolically one of the gods who played with human lives.  Indirectly this had favorable consequences for Kandor, the city Brainiac saved from being destroyed with the rest of Krypton, but the original Braniac remained obsessed with shrinking and imprisoning alien specimens for his delectation.  The TV series comes up with a novel re-invention of Brainiac, by claiming that he's not only a computer built on Krypton, but also that he allowed Krypton to be destroyed so that he could continue his mechanized existence while continuing to absorb new data on alien races.

And yet, despite that inventive rewriting, later stories fail to get any bang out of this revised Brainiac.  It's one thing for Brainiac to have no emotions, but Superman has no real emotional response to this survivor of Krypton-- and enemy of his father Jor-El-- beyond just the desire to destroy the android in vengeance.

Most of the other episodes fail to show any dramatic interaction between Superman and his opponents.  Whether it's a retrofitted character like Toyman or Parasite, or a new nemesis like Livewire or Volcana, the stories are all pretty much the same.  Villain takes action.  Superman tries to stop him and gets sidelined or otherwise detoured.  Villain escapes, comes back to menace innocents again.  Superman stops him this time.  The end.

This basic plot-action isn't bad in itself, but when Dini and Co. used it for their BATMAN series, they managed to layer the action between Batman and his opponents with considerable verve and style.  Batman did not fight the Mad Hatter with the exact same strategy he used to fight the Joker or the Catwoman.  Characterization of both hero and villains mattered in the Batman mythos.

Observing the way Superman was also treated in the JUSTICE LEAGUE cartoon-- also by some of the same creators-- it seems that the dominant concept of the Man of Steel was that he basically had no substantive character, that he wasn't much more than a big dumb farm boy.  Three seasons went by, during which Superman's affections for Lois Lane received only scant allusions.  Such omissions encourage me to believe that whenever the producers had any chance to infuse the hero with passion, they backed away from the challenge.  Even LOIS AND CLARK had a better sense of the centrality of the Clark-Lois-Superman relationship.

Many of the episodes are fleetingly entertaining.  "Mxyzpixilated," relating the first encounter of the hero with the impish pest Mxyzptlk, is amusing.  Luthor episodes, following the comics' revision of the villain into an evil, legally-untouchable businessman, benefit greatly from the smooth voicework of Clancy Brown as Luthor. However, like the Superman-Lois relationship, the conflict of Superman and Luthor remains static and unremarkable. Perhaps the most developed relationship the hero has with anyone is one depicted in a three-episode arc devoted to Batman as a guest-star; here the writers did develop a fair take on the two heroes developing a dubious affection for one another.

Many of the plots, particularly in the third season, emphasize the hero's encounters with the forces of Darkseid.  Darkseid, unlike the rest of this Superman's fight-and-flee rogues' gallery, is a figure of Satanic majesty.  Even when Superman defeats this villain physically, Darkseid remains in a sense unbeaten, living on as the virtual incarnation of evil.  Yet this struggle too lacks the deeper resonance found in the "Fourth World" comics of Jack Kirby, from whence Darkseid springs.  In contrast to Kirby, the producers of the Superman series apparently view evil as inhering mostly in mindless violence.  Villains are never very clever in this world.

Only one episode, entitled "Ghost in the Machine," approached some degree of drama, precisely because it allowed one of the support-cast some room to breathe.  Brainiac, in need of a new body following his last encounter with the superhero, captures Luthor to better use Luthor's immense scientific resources.  Mercy Graves, Luthor's faithful bodyguard-chaffeur, enlists Superman to help her rescue Luthor.  Superman, puzzled by Mercy's devotion, warns her that Luthor cares nothing for her and will betray her if he has to.  The hero's prediction is borne out; Luthor does leave his faithful servant to die, and only Superman's intervention saves her life.  Yet, in a moving coda, Mercy continues to serve Luthor, and the episode's last shot shows the Man of Steel gazing down at her as she helps Luthor into his car-- a god puzzled by the foibles of mortals, and yet empathetic to them as well. 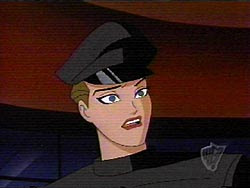 That's a Superman I wish I'd seen more of in these many, many episodes.


Posted by Gene Phillips at 4:11 PM
Email ThisBlogThis!Share to TwitterShare to FacebookShare to Pinterest
Labels: combative adventures, the marvelous