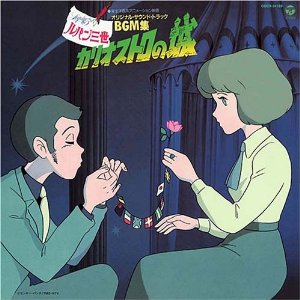 
In terms of phenomenality, the franchise LUPIN III is all over the map.  Some of the manga stories are zany erotic adventure-tales published for a PLAYBOY-like demographic audience in Japan, but which have no metaphenomenality.  The first animated film is outright marvelous, pitting the wild Japanese thief (named for his grandfather, famed French thief Arsene Lupin) against a mad scientist seeking the all-powerful philosopher's stone.  CASTLE, the second animated feature starring Lupin, best fits the "uncanny" category given that most of the peculiar devices used by or against Lupin are not quite marvelous-- automatic laser-beams, for example-- but carry the vibe of the metaphenomenal.  On a related note, Lupin is aided by two formidable henchmen: Jigen and Goemon.  Jigen is simply a skilled marksman, but Goemon is a samurai possessed of such "outre skills" that he can cut clothes right off of his opponents-- which usually discourages them from making further attacks.

CASTLE was one of the best-known anime feature in the United States during the first anime boom, possibly because by the time it reached American shores, its director Hayao Miyazaki had already garnered considerable fame for his later, more personalized works, such as 1984's NAUSICAA.  Miyazaki has stated publicly that he would have preferred to do another story for this film, but that time-constraints forced him to use CASTLE instead.  Still, much of Miyazaki's fondness for strong sentiment-- diametrically opposed to the cavalier attitude of the original manga from author "Monkey Punch"-- informs the structure of CASTLE.

Following a rousing burglary of a casino, Lupin and his aide Jigen find that they've ripped off counterfeit money.  This inspires Lupin to seek out the source of the operation-- for the thieves' monetary benefit, of course-- in the postage-stamp nation of Cagliostro.  However, Lupin's mercenary motives take a back seat to rescuing a fair damsel named Clarisse, seen initially as a literal "runaway bride," fleeing a group of soldiers in a car.  Despite Lupin's efforts Clarisse is re-captured by the soldiers and taken back to the castle of Count Cagliostro, who plans to force Clarisse to wed him and join the fortunes of the "two houses of Cagliostro."

Lupin figures out that the Count is the one behind the massive counterfeiting scheme, but he later confesses an even more involved motive for combating the villain.  He eventually reveals to Jigen that as a young man Lupin made a previous assault on the Castle, again to steal the counterfeiting plates.  He was shot and almost killed, only to be saved from death by a young school-girl. Perhaps ten years later, he recognizes that Clarisse is that schoolgirl grown to young womanhood, though she never recognizes him as the thief of yesteryear.

The action-kinetics between Lupin's group and the Count's men are always above-average, particularly a climactic duel between hero and villain in a clock-tower.  However, the psychological subtext is most interesting.  At one point in the Japanese subbing, Lupin calls the Count a pedophile for wanting to marry a girl much younger than himself, though Clarisse is no longer a child.  So on one level Lupin seeks to prevent a dirty old "playboy" (like the readers of Monkey Punch?) from despoiling a virgin girl.  However, Clarisse falls in love with Lupin-- despite a similar age-difference-- and it's strongly suggested that Lupin is tempted, though in the end he does the right thing and forswears her.

However, after killing the villain he still does escape with a lot of filthy lucre, so there's some compensations to be had, after all.
Posted by Gene Phillips at 3:22 PM
Email ThisBlogThis!Share to TwitterShare to FacebookShare to Pinterest
Labels: combative adventures, superlative skills (u), the uncanny