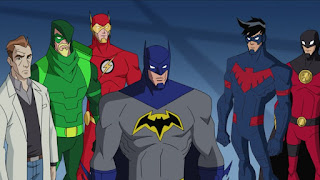 
If I hadn't been informed that the primary reason for the existence of this DTV franchise was to sell Mattel toys, I would've thought that its true goal was to mash-up as many Batman-TV shows as possible. BATMAN BEYOND put forth a future-Gotham Batman wearing high-tech armor, and so does this film, in addition to placing all of the Crusader's fellow heroes in the future as well, In addition, there's a lot of the jokey feeling of BATMAN: THE BRAVE AND THE BOLD, though the jokes are not nearly as funny and the Big Bat only slightly changes up his ensemble of fellow heroes in the next two DTV entries. Green Arrow, Nightwing, and Red Robin are said to be in all of them, with Flash making two appearances and Cyborg just one.

Though the animation and voice work is competent-- indeed, the voice of "Young Batman" from BATMAN BEYOND shows up here incarnating Nightwing-- the producers behind the scenes didn't spend a lot of time cogitating on future-Gotham. Someone who didn't know anything about the history of the original Dick Grayson-Robin and his various successors would have no idea what's going on with Nightwing and Red Robin, beyond a smattering of references to Nightwing's former status as the first Bat-sidekick.

The same thing applies to the universe of super-villains on which the film trades. In this world, though Catwoman is mentioned as an ongoing crook (though she's not seen), the Penguin is not yet a criminal, only a flamboyant rich guy. Fut for reasons that are never very clear, he decides that his first foray into crime requires a team called the "Animilitia," made up of career super-crooks on an animal theme: Killer Croc (also from the Bat-franchise), the Cheetah (Wonder Woman), Silverback (Blue Beetle), and Man-Bat (Batman again). This goofy premise resembles nothing any previous version of the Penguin would've undertaken, and I suspect that its only justification was to help sell assorted toys of DC characters.

I assign this video-jaunt the cosmological function simply because, in the course of the heroes contending with the beastly bad guys, a few factoids about animals are thrown in, but it's pretty thin gruel. Certainly the producers have no comprehension of the main hero's psychology, nor that of the main villain, even though the DVD throws in an appreciation of the Penguin that's more enjoyable than the principal feature.

Posted by Gene Phillips at 2:06 PM
Email ThisBlogThis!Share to TwitterShare to FacebookShare to Pinterest
Labels: combative adventures, the marvelous