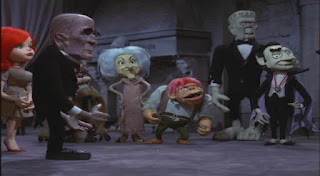 
Just to get one nagging item out of the way: there's no good reason for the title to sport a question mark. It's true that there's no major party-scenes as such, but early in the film Doctor Frankenstein (Boris Karloff) does assert that he's calling together all of the famous monsters for a "convention," and that's enough justification for calling it a "party" of sorts. Not sure why anyone in production thought that ambiguity was a good idea.

I remember that the last time I watched PARTY straight through, I found it a charming homage to all of the classic movie-monsters, perhaps the most inclusive one since it included characters not usually invited to monster-mashes, like Mister Hyde and the Notre Dame Hunchback. This time, though, I was much more aware of the wonkiness of the puppet-animation and the bad, Borscht-belt humor, to say nothing of the annoyingly mediocre songs.

This awareness didn't cause me to totally dislike PARTY. I'll put aside the possibility that I just wasn't in the mood to view the flick, since I was looking forward to a re-screen based my earlier response. I conclude that for me PARTY is just one of those films that exhausts all of its secrets/surprises in one showing, and that, once one knows what to expect, the problems become more glaring.

There are some interesting touches, to be sure. In contrast to some monster mashes, these monsters live in a world that's largely unaware of their existence, though, as noted earlier, they've apparently made lives for themselves that allow them to take time out from dastardly deeds in order to attend conventions. Doctor Frankenstein's "Isle of Evil" in the Caribbean is apparently always the venue for the celebrations, but as the film opens, Frankenstein is planning to retire from his position as the head of the monster's organization. This is because, although he's already created two human-sized creations, the Monster and the Monster's Mate (Phyllis Diller), he's reached the apogee of his scientific career by concocting a chemical capable of destroying anything. Having nowhere to go but down, Frankenstein explains to his lovely lab assistant Francesca that he will turn over his position to his only living relative, his nephew Felix Flanken. This steams Francesca, who believes that she ought to have this exalted role.

So out go the invitations, and all of the famous monsters journey to the Isle of Evil, some of them even taking passage on the same ship as Felix. The nephew is a bumbling but well-meaning sort, given a Jimmy Stewart-esque voice, but he doesn't even know monsters exist, much less his uncle's association with them. He meets a few of them on the ship, such as Mister Hyde, and doesn't even realize their nature.

Once on the Isle, Frankenstein drops the bombshell on Felix. For a really smart mad scientist, one might've thought he would find some way to make the job appealing to the naive youth, or at least take provisions to keep the other monsters from contending for the position. Francesca doesn't help matters, for she lets the other monsters know about the destructive chemical, so that they all want to have control of it-- though the question of who's going to be the Big Boss isn't really addressed. It's not clear what the monsters want to do with the disintegrating chemical, but, being monsters, it's not long before they fight amongst themselves, even before they try to get rid of the incredibly lucky Felix. Indeed, the fact that the monsters turn on Francesca leads to a hookup between the two "young people"-- though by film's end it's clear that they, too, are not precisely what they seem.

As stated already, the jokes are pretty moldy, and I wouldn't think they'd be funny, then or now, to anyone but small kids. Aside from Francesca, I'm not fond of most of the character-designs, credited to veteran EC artist Jack Davis. Harvey Kurtzman, best known for EC's MAD, teamed with another writer on the script, but there's no life in this party: both writers turn out little beyond schtick. There is an early reference to another monster known only as "It"-- presumably because It's real name was still trademarked-- and this leads to a pretty good payoff at the end, as well as a judicious use of the fatal liquid to get rid of all the obnoxious critters.
Posted by Gene Phillips at 11:45 AM
Email ThisBlogThis!Share to TwitterShare to FacebookShare to Pinterest
Labels: the marvelous