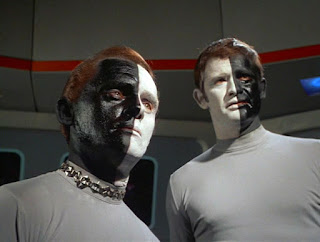 
The back-to-back airing of "Let That Be Your Last Battlefield" and "Mark of Gideon" was propitious, for they are both somewhat preachy, overly rhetorical episodes, despite the strength of the actors' performances.

The Enterprise is on its way to perform one of its seemingly endless health-related missions when they encounter a fugitive shuttlecraft stolen from a Federation base. The craft disintegrates, but the transporter rescues its sole occupant: a half-black, half-white humanoid from an unaligned planet named Cheron. This alien's name, "Lokai," may be a reference to the Nordic trickster-god and thus to the alien's trickster-nature. Lokai introduces himself as a political refugee of his planet's tyrannical rulers. Kirk and Co aren't so much interested in his troubles as in completing their mission, after which Lokai will be remanded to the Federation for criminal charges.

A second half-black, half-white alien named Commissioner Bele comes aboard the Enterprise. He claims to be a law officer of Cheron, and he demands that the crew turn Lokai over to his authority, claiming that Lokai has a long history of dissidence and hate-mongering. Kirk gives Bele the same reply he gave Lokai: first comes the mission, then arguments to Starfleet re: extradition. Bele then uses his super-mental powers to take over the function of the ship, in order to compel it to go to Cheron. Since Kirk finds that he cannot overcome Bele's mental powers (or those of Lokai for that matter), he triggers a self-destruct sequence that he alone can suspend. Bele gives in and returns control of the ship to Kirk.

However, both Cheronians are merely laying low, and while the Enterprise is performing its health-errand, both Bele and Lokai attempt to instill their political postures with the mildly curious crew of the ship. During this period, Bele and Lokai have their most persuasive scene, as Lokai argues that his people were kept as slaves for centuries, while Bele responds that they received their freedom long ago but never did anything with it. The one-on-one correspondence to American black/white relations is preachy in the extreme, and yet, it still carries a certain punch despite its transparency. It certainly works better than the psuedo-Swiftian touch that the two men hate each other's species because they are respectively black-and-white on the wrong sides.

Bele, for his part, is also waiting for Kirk to drop his guard, during which time he disables the self-destruct device and once more shanghais the ship to provide ferry-service to Cheron. There both Bele and Lokai behold the chaos their planet has suffered because of racial riots, and the Enterprise leaves them both in the midst of their "last battlefield."

The Enterprise is ordered to establish diplomatic relations with Gideon, yet another unaligned planet whose trade the Federation covets. The people of Gideon are extremely private and will allow only one Federation representative to beam down, and Kirk gets the honor of so doing. But Kirk ends up in the Enterprise, or a reasonable facsimile thereof, wherein he seems to be utterly alone. Moments later, he meets a beautiful veiled woman, who knows her name to be Odona but claims to have no memory of how she came here or even if she is a native of Gideon.

Back on the real Enterprise, Spock and the others are alarmed to hear the Gideonites claim that Kirk never appeared on their world. They attempt to blame transporter error, and diplomatic considerations trump Spock's desire to make a direct investigation. Eventually, the Vulcan "goes rogue" in order to find the captain.

It's no great surprise when the episode reveals that the facsimile Enterprise is located on Gideon, which planet suffers from yet another "relevance problem:" that of overpopulation. Eventually Kirk learns that Odona is faking her loss of memory, and that the entire scheme is designed to expose her to Kirk's presence so that she will catch an illness from him, thereby to spread the disease to her people and cut down the population. It's one of the third season's more ridiculous conceits, and aside from the performances, the only thing that makes the episode palatable is a scene showing the milling crowds of Gideon outside the mock-up ship.

Posted by Gene Phillips at 3:27 PM
Email ThisBlogThis!Share to TwitterShare to FacebookShare to Pinterest
Labels: combative dramas, the marvelous