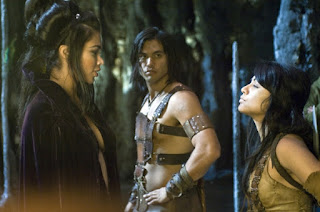 When I reviewed the third iteration of the SCORPION KING series, I remarked that it wasn't as fun as the first film, and that I barely remembered the second film in the series. However, though KING 2 certainly had the outward appearance of being just another routine DTV franchise-sequel, a closer look caused me to realize that despite its obvious flaws (lame acting, lousy FX), the story was actually a little more mythically portentous than the original flick.

The behind-the-scenes credits would seem to encourage such a belief: credited scripter Randall McCormick barely worked on anything that wasn't a sequel, and director Russell Mulcahy was a long way from his one indisputable hit, 1986's HIGHLANDER. Nevertheless, the script follows an interesting quasi-Freudian pattern. In the character's first appearance, he was actually an archaic man turned into a modern-day monster in the course of the second MUMMY film, while the 2002 film showed Mathayus at the apex of his career as a hero in the mostly fictional ancient realm of Akkad.

KING 2 pursues a familiar strategy: showing Mathayus as a teenaged barbarian warrior (Michael Copon). The youth is defined as a son seeking to emulate his respected warrior-father Ashur, who's respected for his prowess with the king's bodyguards, the Black Scorpions. Ashur forbids Mathayus from following in his footsteps, but the teenager joins a mercenary training-camp anyway. There he encounters Layla, a teenaged girl with whom he's grown up, and who wants to be a warrior. Both teens get on the bad side of their trainer Sargon, but Ashur's pull with King Hammurabi saves them from punishment.

Sargon, however, is more than just a trainer of mercenaries; he's also (very improbably) a guy who's made a deal with some Akkadian devil to get mystic powers. He uses his powers to secretly slay both Ashur and Hammurabi, and then (even more improbably) ascends to the throne of Akkad. Both Mathayus and his widowed mother Inanna know that Sargon killed Ashur but cannot prove it. Mathauyus continues to train as a warrior, waiting for the chance to slay his father's killer.

After coming back from some campaign, Mathayus has a brief scene with his widowed mom, and then meets the new king, who doesn't seem to remember the son of Ashur. Sargon takes a quasi-paternal interest in Mathayus, inviting the latter to join his bodyguards-- the first move that moves Sargon from the role of "father-killer" to "bad father."

Mathayus bides his time, which gives him the chance to accept the king’s hospitality by dallying with a few slave-girls. Then the hero tries to slay the usurper. However, Sargon's magical powers render him  invulnerable to ordinary weapons. Mathayus flees the king’s forces and seeks a method to slay his enemy.  He meets Layla again, and their liking for each other is transparent. The two of them are joined by Ari, a young Greek scholar, who persuades them that for a price he can lead them to a sword capable of killing Sargon.

Ari leads the other two to Knossus, where they invade the temple of the Minotaur and slay a very badly-done bull man. Ari then reveals that the sword is in the underworld, the land of the dead. Mathayus remains firm on slaying his father's killer, and even makes a few more converts in the temple: Greek warriors eager to loot the underworld of its treasures. Their leader Pollux is sort of a 'good father stand-in," for he knew Ashur in life and is roughly the same age as the hero's daddy. During the group's trek into the netherworld, Mathayus also sees a dead spectre whom the hero thinks is Ashur, though the viewer does not see what the hero sees.

After the would-be thieves have slain a few underworld monsters, the domain's queen Astarte shows up. She claims to be "the goddess of love and war" but takes a shine to Mathayus. While she tries to tempt him into becoming her consort, some of the warriors sneak away to look for the magic sword, which they find and successfully pilfer. However, Layla can't stand seeing the goddess mess with her chosen man, and challenges Astarte to a fight, significantly insulting her as a “cradle robber.”

After a short battle between the young and the ageless, Astarte cheats and wins the fight.  She then tells Mathayus that she has Ashur with her in the underworld with her, and, though she doesn’t quite state her relationship with him, it's not impossible that she's dallied with him as she now dallies with the hero, which would make her the "bad mother" against Inanna's "goiod mother." Despite Mathayus offending the goddess by rejecting her,  most of the expedition escapes-- though "good father" Pollux perishes and remains behind.

While the good guys journey to meet "bad father' Sargon, "bad mother" Astarte meets him first. In fact, while Sargon is having sex with some slave-girl, Astarte possesses or replaces the girl just as Sargon's trying to have sex with her. Astarte hasn't come for pleasures of the flesh, though: she wants to be sure that Sargon-- who has apparently received his occult powers from her-- retrieves her sword. Sargon asks her for more power and she bestows on the villain the ability to become a scorpion-monster-- thus foreshadowing Mathayus's final fate in the second MUMMY film.

Amid other complications, Mathayus confronts Sargon, but the wily villain disguises himself as Ashur, thus providing yet another link between “the two fathers.” The disguise doesn’t fool the hero, since he believes that he saw his father in the underworld. Sargon then reveals that he's been the prime mover in the hero's quest, for he suborned Ari the Scholar to steal the real sword and bring it to Sargon. However, Ari double-double-crosses Sargon, so that Mathayus gets the really real weapon and eventually slays his enemy in a big battle.

Once the "bad father" dies, “bad mother” Astarte shows up to reclaim her sword. She's tempted to kill Mathayus and take him down to her realm with her, but he improbably convinces her to let him live since she'll have him one day. The last thing Mathauys sees before swooning is Astarte, and when he wakens, the next thing he sees is his real mother Inanna (the second of her two scenes in the whole film). All of Mathayus's surviving allies are there as well, with Layla taking over as the hero's destined squeeze. Since the first film focuses on how the character first became "the Scorpion King," this teen version of the hero doesn't attempt to ascend to the Akkadian throne. A final voice-over reminds the audience that Mathayus does have a somewhat tragic fate in store, and that his heroic propensities will at a future date lead to him becoming a monster not unlike the "bad father's he's slain.

On a minor but not irrelevant note, the name "Layla" strongly resembles that of a Near Eastern goddess called variously Lilith and Lilitu, and this goddess also shares characteristics with two others whose names are evoked in the film: Inanna (also called Ishtar in antiquity) and Astarte. I don't think that this name-association  can be simple coincidence, and I find it more probable that writer McCormick intentionally gave all of the women in the hero's life roughly-similar names. I would not press the Freudian comparisons too far. Still, given that his real mother Inanna barely has any purpose in the script, her appearance so close to Astarte at the climax may have been informed by a quasi-Freudian notion of the basic identity of the two mothers-- and even of the prospective mother of the hero's future children, if any. Similar, there are so many good and bad versions of the father in the film that some Freud is justified. This intellectual debt, however, may not do much for many viewers, who would be justly irritated by the film's unfunny lapses into contemporary phrases like "music hath charms to soothe the savage beast" and "what fresh hell is this."
Posted by Gene Phillips at 2:58 PM
Email ThisBlogThis!Share to TwitterShare to FacebookShare to Pinterest
Labels: combative adventures, the marvelous