When I chose to check out 2009's STAN HELSING on a streaming service, I wasn't doing much more than indulging in a completist urge to see more "monster-mash" films. I didn't expect much from this obscure Canadian-American horror-spoof, and I didn't get much-- though I did get a little more than I've ever got from the American SCARY MOVIE franchise. (Parenthetically, HELSING was released as SCARY MOVIE 5 in some foreign markets.)

The nub of the film's conceit is that the title character is the descendant of the classic vampire-hunter Van Helsing, though he doesn't know it. Stan's a self-absorbed video-store clerk at "Schockbuster," back in the day when there was a Blockbuster to mock. He doesn't even plan to attend the same Halloween party as his three friends Teddy, Nadine, and Mia, but he does impose on them to help him complete an errand before he goes home for the night.

Almost immediately, Stan and his buds get pulled into a world where MAD-denned versions of horror-movie monsters really exist, starting with a version of Chucky and some weirdos loosely borrowed from both THE TEXAS CHAINSAW MASSACRE and THE HILLS HAVE EYES. (Oddly, HILLS is the only horror-film explicitly named in the film.) When the four youths try to complete their errand, they end up in a small town plagued by faux-movie monsters, though none of these Gen-Y types seem to realize that "Fweddy" and "Pleatherface" seem to have stepped off the movie screen. In the end, the indifferent Stan has to get his act together and become a monster-slayer, though the final conflict is so desultory that there's not much different from his earlier self.

At best, HELSING may be funny in places if you like raunch in your humor, and Bo Zenga's direction is certainly livelier than a lot of straight-to-video offerings. But HELSING's primary strength is one that the bigger-budgeted SCARY MOVIE franchise never had, to the extent that it's a strength if a filmmaker chooses to "dance with the one what brought you."

STAN HELSING might not be anything but a dumb horror-spoof, but it doesn't advertise itself as anything else.

This, in contrast to the SCARY MOVIE franchise, which in addition to being more contemptuous of its own audience, vitiates its subject matter by throwing in random spoofs having nothing to do with horror. 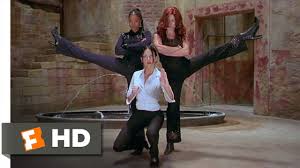 Posted by Gene Phillips at 1:07 PM
Email ThisBlogThis!Share to TwitterShare to FacebookShare to Pinterest
Labels: the marvelous