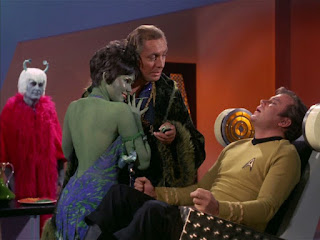 
"Whom Gods Destroy" has been rightly castigated for its lapses in story-logic, but one must admit that it is one of the livelier episodes of the third season.

Kirk and Spock beam down to the cunningly named "Elba II," where the Federation maintains a treatment-center for the criminally insane. Their mission is to deliver a new form of medication that may alleviate even the most extreme cases-- but the inmates, as if wanting to hold on to their respective madnesses, have taken over the asylum. Their leader is former starship captain Garth, who now styles himself "Lord Garth" and displays delusions of Napoleonic conquest. He's also a man whom Kirk admired during his own academy-training, though this element doesn't come to much since Garth and Kirk don't actually know one another.

An earlier accident injured Garth, inculcating his madness, and though friendly aliens saved his life, they also taught him techniques by which he can metamorphose into a duplicate of anyone he pleases to emulate. Less explanation is devoted to Garth's main weapon against the Federation: a new explosive capable of annihilating whole planets. But to use this weapon Garth needs to suborn a starship. He plans to take over the Enterprise by posing as Kirk. However, Kirk has taken advance steps to prevent anyone from making illicit use of the transporter: giving Mister Scott (helming the ship in Kirk's absence) the order not to beam up anyone who can't supply the proper answer to a code-word. In another context, this might seem like smart planning, but since Kirk had no reason to use a code in this situation, it comes off as special pleading.

Contrived though the conflict is, it is fun to see Garth and his nuthouse allies trying to coerce Kirk into revealing the code-response, up until the point that Spock manages to get the drop on Garth. However, at the time, Garth has duplicated Kirk, presenting the Vulcan with two Kirks from which to choose. TREK fans will be aware of Leonard Nimoy's official protests of the stupidity of this scene, in which Spock allows the two Kirks to fight in order to suss out the real one. I have nothing to add to these objections, except for the very slight caveat that the "Kirk on Kirk" fight is one of the third season's better punch-ups.

On the whole, the narrative plays around with the idea of a "Napoleon complex" but really has nothing of substance to say about it.

Posted by Gene Phillips at 2:43 PM
Email ThisBlogThis!Share to TwitterShare to FacebookShare to Pinterest
Labels: combative dramas, the marvelous