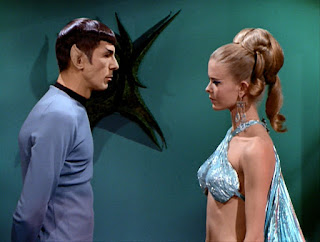 
After due consideration, I've decided that "The Cloud Minders" deserves the honor of "Worst Classic Trek Episode." It's a preachy tale about the conflict of "the haves" and "the have nots," possibly loosely derived from Lang's METROPOLIS, and it treats both Kirk and Spock more moronically than any comparable episodes, such as "Whom Gods Destroy."

For the second and last time in this series, I'll reference remarks of David Gerrold from his book THE WORLD OF STAR TREK. At one point, he comments on the major changes in the story he co-wrote with Oliver Crawford once a third writer, Margaret Armen, produced the final filmed script.


in the telecast version, the whole problem was caused by Zenite gas in the mines, and "if we can just get them troglytes to all wear gas masks, then they'll be happy little darkies and they'll pick all the cotton we need..."

Somehow, I think it lost something in the translation.


The "cloud minders" of the title-- who are also the "haves" of the story-- are implicitly the inhabitants of the aerial city Stratos on the planet Ardana. The planet is rich in a mineral called "zenite" which happens to be of great use for one of the Enterprise's many medical missions. (It may not be coincidence that the name of the mineral resembles the Greek word for "stranger," best known for its contribution to the familiar word "xenophilia.") Kirk and Spock beam down to Ardana to pick up a consignment of xenite, but they don't seem to have any advance intelligence on the planet's political situation. Not only are both crewmen surprised to find out that the surface of the planet is dominated by a subset of Ardanans called "Troglytes," they're also astonished when a dissident group attacks them after hijacking the needed minerals. There doesn't seem to be any real reason for the dissidents to attack soldiers of the Federation, aside to provide a big fight at the episode's opening. Later, the group's female leader Vanna attacks Kirk in his Stratos bedchamber, apparently wishing to kill rather than capture him, for reasons that make no more sense than the earlier assault.

In any case, after Kirk and Spock quell the dissident force, Plasus, leader of Stratos, shows up with his guards and takes Vanna into custody. The newcomers are promised that their zenite will eventually be located, and in the meantime they get a tour of Stratos, a repository of high art and philosophical meditation. Spock is particularly charmed by Droxine, the lovely daughter of Plasus, and though their flirtation is relatively restrained, Spock's willingness to discuss his people's mating-urges flies in the face of his established character. Soon both heroes learn that the Troglytes are kept under the thumb of Plasus's corrupt authority, and so Kirk determines that the best way to assure the Federation's supply of zenite is to overthrow that authority by forcing the "haves" to dicker with the "have nots."

Kirk's methods of so doing are a good deal more high-handed than most of his other empire-building activities, but he's under the influence of an invisible gas from the zenite minerals. As noted in the quote above, this was not one of Gerrold's ideas, and it's admittedly not a particularly good one. However, I dispute Gerrold's conclusion. I believe the zenite is a stand-in for all of the environmental factors that plagued marginalized people in the real world, since it's made clear that once Vanna has been removed from the surface with its debilitating effects, her intellect is the equal of any Stratos citizen. It may be that Armen wanted some such contrivance to explain how the societal bifurcation came about, given that most of the Troglytes and the Stratos-citizens are Caucasians (aside from one Stratos guard, who just happens to be played by Fred Williamson, later famous for a series of B-action films).

But even without my agreeing with Gerrold's "happy darkies" interpretation, "Cloud Minders" is dismally preachy, with tedious action-sequences (particularly Kirk fighting a robed, middle-aged man at the climax) and all those ghastly, grating flirtation-scenes between Spock and Droxine, which don't even serve any real purpose in the plot.
Posted by Gene Phillips at 1:30 PM
Email ThisBlogThis!Share to TwitterShare to FacebookShare to Pinterest
Labels: combative dramas, the marvelous