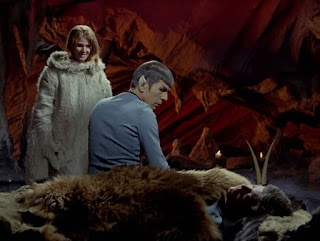 
In response to a sun very close to going nova, the Usual Gang of Three beam down to the planet Sarpeidon (named, for no reason I can see, after a Greek king best known for his imposture of the god Zeus). Federation records show that the planet should have a booming population, but scanners can only locate one life-form on the planet, in its library. Kirk, Spock and McCoy meet an old man, Mister Atoz (as in "A-to-Z"), who mistakes them for natives. Impervious to the crewmen's questions, Atoz insists that because the sun is going nova, they must quickly make use of a library-device called "the atavachron."

"Yesterdays" is a clever time-travel concept, positing that the entire population of a doomed planet chooses to go back to their earlier historical time-frames, so that they can live out normal lives rather than being killed outright. In addition, the story coheres with a trope occasionally seen in other TREK episodes: the fear of atavism, that the inhabitants of a contemporary society may regress to the customs or attitudes of an earlier era.

Kirk is responsible for mucking things up this time: he hears a woman scream just past a door in the atavachron, and he blunders through it. Transported to a Renaissance-like time-frame, he saves a woman who happens to be a petty thief, but by so doing gets locked up, accused of being a devil-worshiping witch. Spock and McCoy are just as reckless, following the captain but ending up in another world, dominated by unceasing snow and ice.

Kirk does get some aid when he fortuitously encounters one of the modern-day Sarpeidonians, now masquerading as a man of an earlier time. Spock and McCoy are succored by a lone woman, Zarabeth, who was exiled to the ice-time by political opponents, and who exists in lonely exile. Though she helps Spock save McCoy from frostbite, she soon covets the Vulcan romantically. For his part, Spock begins to regress in a physical sense-- unlike Kirk and McCoy-- as he begins to respond the way a savage Vulcan would have in the same time-frame. Though the science doesn't make much sense, the scenes of Spock's near-seduction by Zarabeth speak both to the fear of cultural regression and the threat of the feminine.

Naturally, Kirk's progress back to the real world doesn't have nearly as much dramatic heft as the return of Spock and McCoy, to say nothing of the tragedy of Zarabeth, Spock's final love in the original series-- who is, from the perspective of his own time, "long dead," though obviously alive in his Vulcan heart.

Posted by Gene Phillips at 2:34 PM
Email ThisBlogThis!Share to TwitterShare to FacebookShare to Pinterest
Labels: combative dramas, the marvelous