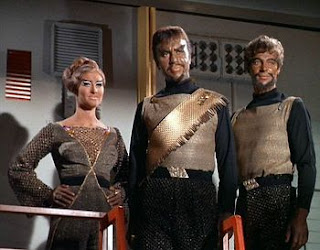 
In my review of A PRIVATE LITTLE WAR, I noted that its reputation as an anti-Vietnam screed was largely undeserved. If any Classic Trek episode deserves that honor, it would be DAY OF THE DOVE.

The short version: both the representations of the Federation and of the Klingon Empire are maneuvered into a conflict by an alien entity that feeds on the negative emotions of warfare. The alien, never seen as anything but an animated effect, shows intelligence in that it's capable of advance planning, for it lures Kirk's ship, and that of a Klingon named Kang, to a deserted planet with false distress signals. Kirk manages to get the upper hand on Kang, and takes the Klingon and his landing-party aboard the Enterprise as prisoners. At this point the alien reveals matter-manipulation powers, confining most of the Enterprise crew below decks and orchestrating an ongoing battle between Kirk's faction and Kang's-- but one in which both sides are armed only with swords rather than phasers. The Klingons, routinely portrayed as savage types, embrace this conflict while Kirk and Spock try to figure out what's going on. Even the Vulcan isn't immune to the alien's mental manipulation, though, and some crewmen, such as Chekhov, become totally invested in the wholesale slaughter. At last Spock concludes that they can get rid of the alien by ceasing to feed it (a rather diabolical take on the Tribbles plotline!), and Kirk uses logic and reason to make peace with Kang's forces.

Though DOVE isn't precisely abrogating the necessity of military action, Jerome Bixby's script is prescient in critiquing America's involvement in the Vietnamese "war of attrition," which had not in 1968 become as universally rejected by the populace as it is now. Bixby's script is equally dextrous in terms of describing the role of xenophobia in keeping the war-fires burning. Some TREK episodes are guilty of becoming preachy on this topic, but Bixby keeps the moral resonant by using "good" characters, such as Scott and Chekhov, to channel racist sentiments.

On a side-note, the savage Klingons of this episode seem to be the direct ancestors of the ones in all the later TREK serials, as opposed to the sneaky Klingons of earlier episodes.


Posted by Gene Phillips at 2:48 PM
Email ThisBlogThis!Share to TwitterShare to FacebookShare to Pinterest
Labels: combative dramas, the marvelous