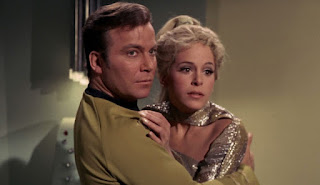 
Jerome Bixby's script "Requiem for Methuselah" is a strikingly ingenious twist on both its immediate influence, the 1956 film FORBIDDEN PLANET and its influence, Shakespeare's play THE TEMPEST.

In the play, the magician Prospero has been exiled to a lonely isle, in the company of a savage named Caliban, the spirit Ariel, and his daughter Miranda, who grows to womanhood on the island. As Miranda reaches the crux of maturation, Prospero perceives a ship nearing the isle and uses his magic to strand several passengers on the isle. This action results in the romance of a young man, Ferdinand, with Miranda, and this seems to be Prospero's main project, prompted, perhaps, by an incident wherein Miranda was sexually menaced by Caliban. Thus one interpretation is that the magician wants his daughter to have a strong male protector, though at least one academic critic argued that Prospero really wants to protect Miranda from his own buried lusts-- and around this roughly Freudian idea the film FORBIDDEN PLANET was based.

"Requiem" starts with another medical emergency, though this time it's the actual crew of the Enterprise who have been infected by "Rigellian fever." Kirk, Spock and McCoy (none of whom have the disease, apparently) beam down to an obscure planet known to have deposits of a curative mineral, ryetalin. The trio are surprised to meet a solitary individual named Flint, who claims to own the planet and has a floating robot (the story's "Ariel") to enforce his wishes. Though initially inhospitable, Flint relents when he identifies with the horror of plague, and even offers to use his resources to collect and refine the needed mineral.

Flint is not quite alone on his world, for a young woman, Rayna Kopec. lives with him as his ward. He does not intend her to encounter the crewmen at all, but she pleads to meet the outsiders, who are the first men she's ever seen aside from Flint. For reasons of his own, Flint allows her to interact with the trio. While Spock is more fascinated with the mystery of Flint's art collection, which has a number of uncatalogued ancient masterpieces, Kirk becomes enthralled by Rayna.

Bixby's ingenious twist puts his "Prospero" in the situation of a hunter using a stalking-horse for an ulterior motive. Rayna is not a human being, but an ageless android, whom Flint, also an immortal, has designed to be his companion for eternity. His problem, intimated in Rayna's first scene, is that the android is largely passive and without emotion, except when intrigued by the newcomers. Whereas it seems that Prospero really intends to bind together Ferdinand and Miranda, Flint hopes that Rayna will become emotionally "charged" by falling in love with Kirk, after which he Flint will simply "take over."

In FORBIDDEN PLANET, though Morbius never evinces visible lust for his own daughter, he's patently jealous when he loses his offspring's regard to a youthful paramour. This causes Morbius to unleash a figurative "demon," loosely modeled upon TEMPEST's Caliban. Flint is more of a planner like Prospero, though his game is much longer. That said, some of his moves are short-sighted, in particular by failing to reveal to Rayna her own artificial nature. The end-scene, in which Flint tells Kirk and Co "the facts of unlife," accidentally bestows this knowledge on Rayna, who apparently overhears the entire exchange (though the direction does not emphasize this fact). Kirk and Flint both make impassioned demands upon Rayna's burgeoning feelings. and then fight over her, bringing about a tragic conclusion.  (This outcome also has the bonus effect of leaving Kirk free and clear, though in point of fact Kirk's romance with Rayna is his last one for the Classic series.)

Freudian psychologizing aside, "Requiem" is the equal of any other season's meditations on the significance of human emotions and passions, which, as the episode ends, even allows for a sort of expression of "love" in Vulcan terms. 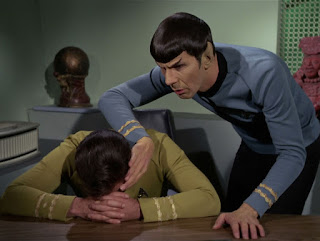 Posted by Gene Phillips at 2:03 PM
Email ThisBlogThis!Share to TwitterShare to FacebookShare to Pinterest
Labels: combative dramas, the marvelous