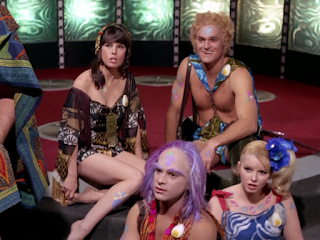 
"The Way to Eden" gets as much of an unjustified bad reputation as does "Spock's Brain," and for comparable reasons: the phrase "space hippies" ineluctably carries the same intimations of absurdity found in "brain thieves from an Amazon planet."

I've always sympathized with "Eden," however, in that its writers made an attempt, however muddled, to confront the sociological issues suggested by the hippie movement in the sixties. Most of STAR TREK's contemporaries, such as IRONSIDE and even THE MOD SQUAD, showed not a scintilla of insight about what the movement might signify in a larger sense. TREK's sci-fi universe allowed its writers to take a more "cosmic" perspective.

"Eden" is another of the "Enterprise gets hijacked" episodes, the hijack-ees being a band of futuristic youngsters who don't dig the rigidity of Federation life. Their one concession to the over-thirty crowd is their leader Doctor Sevrin, a scientist loosely patterned after the real-life guru Timothy Leary. However, Sevrin doesn't want his acolytes to "turn on" or "tune in" to LSD, but rather to "drop out" of Federation culture entirely, by finding a mythical planet called "Eden." There's no attempt to strictly correlate this planet with the sacred garden of the Bible, though it's no coincidence that one of the more prominent hippies is named 'Adam." However, Kirk, having picked up the juvenile delinquents following their theft of a space cruiser, has no interest in their quest. Spock, the eternal outsider, proves somewhat more sympathetic to the ideals of these disaffected youths, and gives them a certain amount of aid and comfort. It's a testament to both the script and Nimoy's acting that this investment doesn't seem to conflict with Spock's vaunted preference for logic over emotion.

Aside from Sevrin-- whom Spock discerns to be insane-- and Adam, the only other prominent member of the hippie-troupe is Irina, a former girlfriend of Ensign Chekhov. In the first version of the script, her character was going to be the estranged daughter of Doctor McCoy. In THE WORLD OF STAR TREK David Gerrold laments the change, but I consider it a horribly derivative concept, the sort of thing MOD SQUAD did to death. I seem to remember that Walter Koenig also expressed dissatisfaction with the change, possibly because it made his character the rule-bound "heavy" who was trying to bring the cheery hippie chick down. However, given Chekhov's status as a Starfleet officer, one might expect him to be less than liberal toward anyone professing anti-Federation sentiments. Indeed, Koenig's tense romantic scenes with actress Mary-Lynn Raypele provide Koening with his best scenes in the series.

Though the space hippies temporarily lull the "straights'" suspicions with music and good cheer, Sevrin eventually launches his plan to take over the ship, fly to the world of Eden (whose location Spock provided), and kill the entire crew in order to cover their tracks. The freaks (all of whom are not aware of Sevrin's fatal plot) descend to Eden. Though none of the Enterprise crew would seem to have any defense against Sevrin's death-device, Kirk manages to destroy the machine just by dint of his being the main hero. When Kirk, Spock and Chekhov give pursuit, the hippies have suffered a rude awakening: their attempt to "go back to nature" shows them that nature is literally "red in tooth and claw." Sevrin and Adam perish for their presumptousness, but contrary to David Gerrold, the message doesn't get dumbed down to "there ain't no free rides." Indeed, in the final scene Spock provides an encomium on the ideals of the hippies as he says farewell to Irina:

Miss Galliulin. It is my sincere wish that you do not give up your search for Eden. I have no doubt but that you will find it, or make it yourselves.

Posted by Gene Phillips at 2:43 PM
Email ThisBlogThis!Share to TwitterShare to FacebookShare to Pinterest
Labels: combative dramas, the marvelous