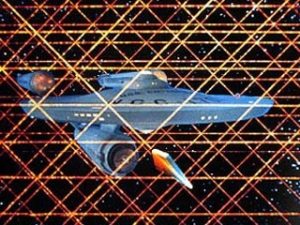 
"Tholian" may be the third season's best attempt at doing one of the series' signature "white-knuckle thriller" narratives. Though the script uses plot-devices reminiscent of "The Galileo Seven" (ship searching for castaways) and of "The Naked Time" (ship's discipline begins to break down), "Tholian" manages to forge a strong story on the classic interaction of Kirk, Spock and McCoy.

The Enterprise, searching for the lost starship Defiant, finds its quarry, but in a region where the normal rules of time and space are starting to break down. While Kirk's ship orbits the derelict ship, the captain takes Spock, McCoy, and Chekhov with him as he beams aboard the Defiant. The crewmen confirm what their sensors indicated: everyone on the Defiant is dead, apparently as the result of everyone killing everyone else. The berserkergang of the Defiant seems to be the result of exposure to the fragmented space, and for good measure, the ship is beginning to phase out of its native universe. Kirk orders Scott to beam everyone back over, but the stress of the foreign space limits what the transporter can handle. Ever the captain who identifies with a ship-- even one not his own-- Kirk stays behind while the other three return to the ship. Before the transporter can whisk Kirk back as well, the Defiant plunges into another dimension and is lost to the Enterprise's scanners.

This sparks the central conflict between McCoy and Spock. The doctor, rather quick to believe Kirk irretrievably gone, argues that the ship ought to leave the fracture-space while it can, since the local stresses are impinging both on the ship's function and the mental stability of the crew. Spock, both because of his friendship with Kirk and his belief that a captain cannot desert a castaway without total proof of demise, elects to stay, searching for the lost Kirk.

As if the fracture-space generates its own protectors, a ship bearing a little-encountered alien race, the Tholians, shows up and demands that the Federation ship must leave the area. Spock considers the area "free space" and when the Tholians get tough, Spock orders an engagement. Both ships take damage, but another Tholian ship shows up, and the two ships began weaving the titular energy-web, designed to entrap and presumably destroy the Enterprise.

Meanwhile, everyone aboard ship is feeling strain not just from external forces, but from mourning over Kirk's demise, made more certain by the effects of the space-battle. McCoy reacts by hectoring Spock, who retorts with icy discipline, but their quarrel is mitigated by a tape made by Kirk against his possible death. Uhura, interestingly, then gets to manifest an apparent new mania: seeing the ghostly spectre of Kirk. Soon Spock and everyone else sees the apparition, and the Vulcan figures out how to rescue the captain and escape the web for good measure.

A strong episode, in terms of both dramatic and physical tension.
Posted by Gene Phillips at 3:49 PM
Email ThisBlogThis!Share to TwitterShare to FacebookShare to Pinterest
Labels: combative dramas, the marvelous