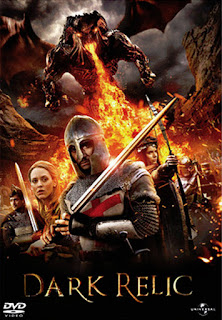 
I've frequently criticized films like THE BLACKKKLANSMAN for overemphasizing ideology at the expense of good plotting and characterization. However, little as I like that type of film, at least Spike Lee has a straightforward message-- "never trust white people"-- and he remains true to that theme throughout the film.

DARK RELIC. a TV-film that seems to have shown up first on the SYFY Channel, doesn't have even that. The script, by one Andy Biggs, seems to have some very fuzzy ideological potential, but it can't even make its own politically correct agenda clear.

It's 1099, at the end of the First Crusade. An English military commander, Sir Gregory (James Frain), is about to journey back to his homeland with his men. Though he's dispirited by the failure of European efforts to reclaim Jerusalem for Christianity, he stumbles across a relic that appears to be a fragment of the True Cross. Wishing to find some way to win at least a minor victory, Gregory and his men elect to journey from the Holy Land to the Holy See in Rome, to present the Pope with their prize.

As soon as the knights go to sea, foul luck dogs them, and their ship in beached. The weary warriors determine to hike to Rome overland, and as more bad things happen, they suspect that the relic may be cursed. They encounter a band of Muslim warriors who have just finished proving their nobility by rescuing some Christian wayfarers from bandits. Though the Christian knights are not sanguine about joining their ranks with non-believers, they elect to do so when the Muslims offer a possible easy route to Rome. So the two groups agree to travel together, along with the one Christian survivor of the bandits. As it happens, this sole survivor is also a challenge to medieval Christian sentiments, for she's a spunky young woman who doesn't believe in anyone's God.

However, even the atheist finds a sort of awareness of contending supernatural forces when her "foxhole" is barraged by more curse-phenomena, like a rain of dead crows falling on the party. The young woman gets even more proof of a devil, if not a god, when the travelers come across a monastery. The head monk affirms that the relic is a piece of the True Cross, but that it has demonic writing on it that will unleash horrible powers when taken out of its proper place in the Holy Land. Of course, all the monks turn out to be possessed by demons, whom the knights are forced to slay, so the head monk's pronouncements are to say the least dubious.

So at last the knights are convinced that the relic is tainted in some way, and that it will only bring evil if taken to Rome. Then, for no reason whatever, a huge gargoyle-like demon attacks the travelers, and after killing more knights is driven away temporarily. Still Gregory will not simply dump the relic in the nearest relic, and the script gives no reason for him to do so. However, this apparent stubbornness works out for the scripter. In the climactic scene, the demon attacks again, and Gregory stabs it with the relic so that both the demon and the relic are destroyed. Typically enough, Gregory and his potential girlfriend alone survive.

The cursed relic is never explained and barely makes any sense. It's possible that the wooden shard has nothing to do with Christ's cross, and that it's simply infected with a curse that blindly sows havoc on anyone near it (unless it's in the Holy Land, where it belongs-- maybe). But even assuming that-- why does some demon from Hell decide to steal the relic? Since the knights have no resources capable of combating the curse, the denizens of Hell ought to be ecstatic that Gregory's going to take it to Rome. Why then does a particular demon-- and just one, probably because that's all the movie can afford-- want to liberate the relic? Andy Biggs has no answer, and it seems unlikely that he didn't even bother to think out the logic of his own scenario.

In addition, though there's a fair amount of fighting in the film, the film, like a lot of other SYFY product, is extremely dull and dismal looking, and the dialogue is often atrocious. Possibly Biggs meant to take the side of the medieval Muslims by portraying even semi-noble Christian knights as wrong-headed for trying to take a sort of "loot" out of the Holy Land. But even that interpretation isn't firmly supported by the confusing script.

Posted by Gene Phillips at 3:28 PM
Email ThisBlogThis!Share to TwitterShare to FacebookShare to Pinterest
Labels: combative dramas, the marvelous