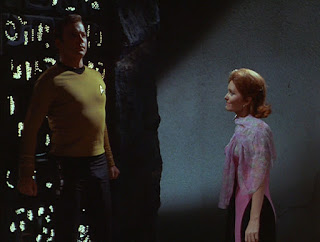 
"Turnabout Intruder," Roddenberry's last contribution to the series, was probably inspired in part by Thorne Smith's 1931 novel TURNABOUT, in which a man and woman switch bodies. Given that this episode was the final one of the original series, it provides a rather poor "final act" for the show, much the way "Operation Annihilate"proved a bad closing moment for the first season. Still, though "Intruder" is certainly not a good episode, the commendable absurdity of its premise makes it more noteworthy than merely mediocre episodes like "Spectre of the Gun" and "Whom Gods Destroy." And in this case the absurdity has less to do with any far-fetched SF-premise than the psychological quirk of the story's villain: Janice Lester, who seems the very embodiment of Freudian "penis envy."

The Enterprise responds to a distress call from Camus II, whose long-dead alien culture is being investigated by Federation archaeologists. An apparent outbreak of radiation sickness has killed almost the entire expedition, except for two: the expedition's doctor Coleman, and Janice Lester, who seems to be suffering from the disease. Kirk, who is among the landing-party, is visibly affected by her pain, for long ago he and Lester had a very combative romantic relationship. Indeed, they broke up, according to Kirk, because she coveted the position of a starship captain, and "punished" Kirk for the sexism of Starfleet.

However, once Lester is alone in the room with Kirk, she reveals that she was shamming, and activates a device left behind by the dead aliens. Kirk is caught upon the device, which then transfers his soul into Lester's body and hers into the body of the captain. Once Lester is in Kirk's body, she exults that "it's better to be dead than to live alone in the body of a woman," and she comes close to making Kirk-Lester dead by strangulation. However, the other members of the landing party return, so that Lester-Kirk is forced to take Kirk-Lester aboard the ship, ostensibly to give "her"  better medical treatment elsewhere. However, because Lester-Kirk is actually planning to kill Kirk-Lester via neglect or happenstance, "she" and her co-conspirator Coleman give orders to take the ailing doctor to a colony with poor medical facilities. McCoy gets his back up, particularly after Lester-Kirk gives Coleman medical authority over the patient, despite Coleman's history of incompetence. This decision breeds mutiny as the regular members of the crew-- McCoy, Spock, Scott, Sulu and Chekhov-- become aware that their captain is no longer acting rationally.

Just as "evil Kirk" and his savage companions could not act like civilized people in "Mirror, Mirror," a woman just can't "be more like a man," and the more Lester-Kirk feels her authority thwarted, the more she expresses her anxiety in a form McCoy calls "hysteria." (The expression is not chosen lightly, given that the term "hysteria" was coined in response to the archaic Greek idea that women were subject to emotional upsets because of their "wandering wombs.") Furthermore, though none of the crewmen initially know how Kirk's malady has come about, they present a united male front against the intrusion of a woman into their sacrosanct grounds. And that defiance causes Lester-Kirk to lose control of her body-switch, so that things go back to normal, in what may be the series' weakest climaxes (no pun intended).

William Shatner and Sandra Smith, tasked with playing one another's characters and genders, perform tolerably enough, though I certainly disagree with critics who claim the story has anything to do with the current passion for "gender fluidity."  Gene Roddenberry seems to have been something of a masculinist, and it may be that he covertly agreed that women should not be starship captains. though he never has any male character endorse Starfleet's sexism. It should be noted that a few episodes depict women in relative positions of competence, if not high authority, such as the lady lawyer in "Court Martial" or the "Federation Commissioner" of "Metamorphosis," and feminine leaders appear throughout other episodes, albeit in other cultures. Overall, though Roddenberry certainly had his own viewpoint on the relative natures of the two sexes, it seems unlikely that "Intruder" is a direct attack on contemporary feminism, though it could well be the writer's "roman a clef" assault on some former paramour.

It should be noted that Doctor Coleman mirrors, through his failings in medical ability, Lester's failings. During her usurpation of Kirk's body, she shows no sign that she actually possesses the ability to perform her office, despite her conviction that she can do so sans any of the requisite training. Though she does encounter real sexism, she allows this opposition to poison both her early relationship with Kirk and her whole concept of the "indignity" of being female. Certainly Lester is no feminist icon. She wants what she wants for herself alone, and, had she succeeded, it's hard to imagine her doing anything to lift up the position of women in Starfleet.


Posted by Gene Phillips at 3:32 PM
Email ThisBlogThis!Share to TwitterShare to FacebookShare to Pinterest
Labels: combative dramas, the marvelous