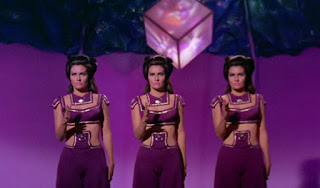 
These two TREK episodes are very woman-centric, leading me to wonder if this was a conscious change of course on the part of the third season's showrunner Fred Frieberger. That said, neither of the female characters featured here are any sort of match for either Miranda Jones or Elaan of Troyius.

"That Which Survives" is basically another "white-knuckle" thriller, in which the peril is entirely external in nature. Kirk, McCoy, Sulu and a disposable redshirt beam down to an uncharted planet to explore it. They unknowingly trigger a programmed defense-routine, which begins with a strange woman (Lee Meriwether) appearing aboard the Enterprise, killing the transport-officer just as the quartet beams down. This peculiar action is followed by a more extreme defensive action, as a mysterious force from the planet propels the ship millions of light-years away.

Spock, commanding the Enterprise, attempts to return to their origin-point, but the strange woman, whose name is eventually revealed as Losira, appears once more aboard ship and sabotages the antimatter drive, so that the ship is in danger of blowing up. Yet Losira also appears on the planet with the four castaways, and kills the redshirt (whom she calls by name) with a touch and the enigmatic phrase, "I am for you."

Losira disappears, appears again and almost kills Sulu, at which point Kirk and McCoy discover that she can only kill the person she's programmed to kill. Thus the narrative follows two parallel courses: Spock and the dour Mister Scott laboring to undo the ship's damage, and the three castaways seeking to avoid death long enough to uncover the planet's secret. Turns out that "Losira" is a simulacrum of a woman long dead from plague, who set up the defense system to protect the world, until her people returned to it. The two plots come together when Spock comes to the rescue and foils the computer-system.

Since all of the copies of Losira are artificial, there's not a lot of dramatic potential in them, though she does serve as a conduit for the tragedy of her people's demise. That said, there's not much logic in the computer making the simulacrum attack individual people on the ship, or sabotage the ship either. If the computer has power enough to fling a starship away, why wouldn't it just destroy the Enterprise outright? (I know, because that would've ended the history.) The scenes on the planet, though, redeem the episode, and the actors do a good job coping with the mystery. 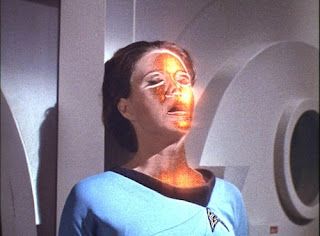 "The Lights of Zetar" refers to a coterie of energy-aliens who pursue and continually attack the Enterprise, though the script never clarifies the aliens' reason for so doing. But the story is far more interested in its "A" story, that of Engineer Scott falling in love with a new officer on the ship, Lieutenant Mira Romaine (Jan Shutan). Indeed, a voiceover by Captain Kirk meditates on the profound consequences of the engineer shifting his devotion to the Enterprise to a human-type woman. However, the only real consequence is that when the Zetar-Lights target Romaine for what seems like a sci-fi version of an old-fashioned demonic possession.

Romaine, unfortunately, is such a terribly underwritten character that it's impossible to tell if the actress could've done better with a good character. The first thing the audience learns about her, thanks to an exchange between Chekhov and Sulu, is that she's supposed to be "the brainy type," but sexy enough that Mister Scott probably "hasn't noticed that she has a brain." However, Romaine never says or does anything particularly brainy, and the most she can do, once the Zetar-Lights target her, is to act peevish. Scott, for his part, has only one response: frenetic protectiveness toward Romaine, though nothing he does or says materially advances the plot. (There is one moment when the possessed Romaine zaps him and he survives, which he interprets as the real lieutenant holding back.)

After a lot of dancing around, Kirk and Co somehow deduce that they can kill off the energy-aliens by subjecting their possessee to a pressure chamber-- which sounds quite a bit like exorcist-practices for driving out demons. The Lights die out, Scotty's happy, and Romaine recovers but is never seen again.
Posted by Gene Phillips at 1:12 PM
Email ThisBlogThis!Share to TwitterShare to FacebookShare to Pinterest
Labels: combative dramas, the marvelous