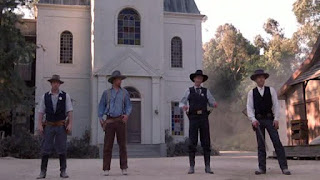 One of the best metaphenomenal westerns I've ever encountered, aside from the best episodes of KUNG FU, debuted on the TNT cable channel-- which I would have to say, never struck me as a font of great original film-making.

A gang of bandits, led by Britton (Eric Roberts) and Guthrie (Peter Stormare), robs a bank in a western town, and during a gunfight, an innocent woman is slain. This moves none of the outlaws save Sonny, nephew of Guthrie (Brad Rowe), but a posse comes after the robbers, so they must flee into the desert. After passing through a dust storm, the gang finds itself in an isolated town named Refuge.

At first glance the citizens of Refuge look like ordinary peacable folks, which should make them easy pickings for the outlaws. None of the locals, even the sheriff (Sam Shepard), carry guns, they won't swear or drink, and every time the church bell rings, the citizens drop what they're doing and assemble in church.

Sonny, by chatting one of the pretty girls, is the first to get an inkling that Refuge is not an ordinary town. Some of the outlaws begin noticing that certain citizens have a resemblance to famous dead gunfighters-- Doc Holliday, Billy the Kid, Jesse James-- while the sheriff himself bears a likeness to Wild Bill Hickock. Eventually the secret comes out: Refuge is a literal "ghost town," where the spirits of dead people have come together to endure a form of purgatory. If they can live righteous lives for a period of time, the citizens can ascend to the rewards of heaven. When one of the locals loses his patience with a nasty outlaw and clouts him with a shovel, a mysterious Indian shows up and escorts the local away to an unknown fate.

The outlaws, though not entirely believing the story, waste no time in taking advantage of the situation. At this point Sonny loses sympathy with his former comrades, particularly when his uncle threatens to rape the pretty young thing whom Sonny likes. It also helps his belief when he actually witnesses a new arrival to town, none other than the woman he saw slain back in the mortal world.

Though the film starts with the outlaws, Gordon Dawson's script is really centered on the former gunfighters, who, to win entry into heaven, must try to resist their instinct to fight back. Sonny, whose name suggests his low-ranking status in the gang, becomes crucial to encouraging the gunfighters to do the right thing, to battle evil even if they may have to go to hell for it. 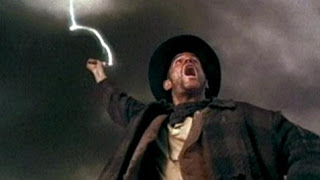 One might cavil that PURGATORY changes its ground rules from time to time, as when one outlaw is literally smitten by heaven, though the skies are silent when it's time for the big showdown. However, one might argue that everything that happens in Refuge has been ordained by "the big man" in order to test the residents, much like the depiction of God in the "Book of Job." But in most isophenomenal westerns, religious characters are nominal figures, confined to watching the battle of good and evil play out. PURGATORY reverses that trope, putting religion in the driver's seat, but still lending validity to the western's crucial myth of the showdown. All of the actors-- even Randy Quaid, whom I personally don't like-- acquit themselves well, though clearly Sam Shepard is "first among equals" here.


Posted by Gene Phillips at 3:12 PM
Email ThisBlogThis!Share to TwitterShare to FacebookShare to Pinterest
Labels: combative dramas, the marvelous